The peonies took a beating 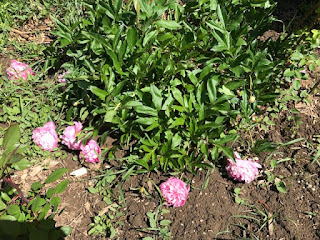 It’s been a week since a gentle spring rain turned to slush and then snow and continued through the night and into the next day. Nothing unusual about that except that it happened late enough in May that gardens had been planted and cool weather crops were making their presence known. The trees along the shaded boulevard where I live had finally leafed out, a little slow this year, I thought.

They should have waited a bit longer. By the time morning came, the weight of the snow was causing havoc. I watched as three huge branches of the cherry tree in my front yard came crashing to the ground. An apple tree in the back yard fared a little better. It only lost two branches.

The central grassy strip up and down the boulevard looked like a war zone. Branches were everywhere, ripped completely away from trees or dangling dangerously, ready to come down any minute. That evening, when I drove down the street, I could hear a ping, ping as bits of snow or leaves or little branches hit the roof of the car. I sped up, hoping to escape a direct hit. I did.

In the next couple of days, the sun came out, the snow disappeared and stressed plants and trees began to raise their heads. Some made. Some didn’t.

The neighborhood looks bedraggled but it’s on the road to recovery. Mother nature got serious about tree trimming this spring. It was probably needed.

It might even be a life lesson.
Posted by Libby James at 10:26 AM