Fifty-three thousand words and I’m not done yet. 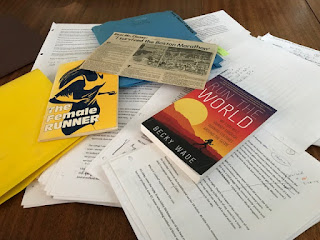 A few months ago, knowing that after all these years of writing I was better suited for telling the truth rather than for making up stuff, as in writing fiction, it would be smart of me to write about some true things.

It would be easy and fun. I’d written about 60 columns on writing and related subjects in the past five years. I’d just gather them up and put them in a book.

I’d call it Are You Still Running? because that is what people ask me all the time.

Yep, I would answer in the sub-title.  Turn the page to see why.

After giving the title some thought—or just getting sick of it—I softened it to Still Running? and that’s where it stands for right now—subject to change of course.

I thought that putting this book together would be an easy task because after all, most of it would consist of stories that were already written.

I began by categorizing them into sections I called People. Places, Reflections, Advice, etc. and then I had lots of stories left over that didn’t seem to fit anywhere. Finally I decided to present them chronologically, as they happened in my life.

The next task was to revise and update the pieces. Surprising how many times you can re-write a few words before it feels like you can’t make them any better. Along with this process, I contacted the subjects of the stories about people to find out what they were currently up to and what their plans were for the coming year. They had lots to tell and I’m so glad I did that.

As I neared the end of working with the existing pieces, I realized that I had more stories to tell. The thing was turning into a monster that wouldn’t let me go. I didn’t mean for it to become a memoir—or a monster-- but it was beginning to feel like both.

I have a few more stories to tell before I call it quits. I’m at a point where I’ve been before in this writing game, wondering who in the world will be interested in all this?

I guess it doesn’t really matter. I’m too far into this project to quit and just let it hide away in the computer.

Posted by Libby James at 3:00 PM No comments:

A race to remember

That was a first for me and mighty welcome as I completed the Shamrock 8k road race in Virginia Beach last Saturday morning, March 17, a few seconds behind my running buddy, Dave Klibbe. Both of us were pleased with our times on this fast, flat course, an out-and-back along the edge of the Atlantic Ocean. It was just cool and breezy enough that the soup really hit the spot.

There are moments, as I prepare for a race, from plunking down the money for lodging and plane fare to the hassle of travel, that I wonder why I’m doing all this. There’s nothing to get nervous about, yet I still have a hard time sleeping the night before a race—crazy!

But then the moment comes when I line up at the start and suddenly, it is all worthwhile and I wonder why I ever thought otherwise.

There were well over 7,000 people in this race, the first event in a weekend that included kids’ races and a half and full marathon the following day. Off-season in Virginia Beach is the perfect time to stage such an enormous event. The hotels and restaurants are plentiful and there’s a state-of-the-art convention center to hold packet pick-up, an expo and a slate of speakers. A Hilton Hotel has to be one of the most comfortable places ever to stay warm during the moments before the race start.

Sixteen “corrals” kept the runners separated according to predicted times and staggered their start so that the fairly narrow boardwalk area never seemed crowded. Runners celebrated St. Patrick’s Day with lots of “wearing of the green.” 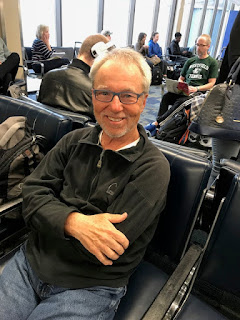 Being part of the USATF (track and field organization) made this huge race seem small and intimate. A separate awards ceremony was held following the race for the couple hundred of us there from all across the country. Old friendships were renewed and there was the usual chatter about upcoming races and dealing with injuries. Runners are such a congenial crowd, it is a pleasure to interact with them.

I can’t think of a better way to spend a weekend. 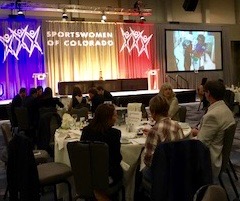 The 44th Annual Awards Celebration sponsored by Sportswomen of Colorado promised to be a “marathon.” Fifty-seven women in dozens of sports ranging from barrel racing to indoor skydiving, soccer to tennis, wrestling to ice climbing, were to be honored individually.

The event began with an athletes reception at 4:15 followed by a cocktail hour, followed by dinner, followed by the presentation of awards—all held at a hotel the Denver Tech Center well over an hour away from my house. To be honest, I wasn’t overly enthusiastic about making the trip.

If I hadn’t, I would have missed learning the details about the accomplishments of an amazing group of women, to stay nothing of an elegant dinner, happy chatter around a table for 10 and the chance to touch base with some athletes that I knew from previous encounters and some that I met for the first time last night.

Award winners ranged in age from high schoolers to oldsters. Barrel racer Sally Ann Fosha is 70 and I’m thinking that at 81, I was no doubt the oldest, getting an award for what I have to call persistence in running. Speed is a thing of the past.

A highlight of the evening was a lively talk by special guest and Olympic silver medalist in the bobsled Lauren Gibbs. An athlete all her life, she was encouraged to take up the sport because of her incredible leg strength. After three years of training, at age 33, she and her pilot took the silver in South Korea a couple of weeks ago. In order to do so, she put on hold a newly-earned masters degree and a six-figure job in the corporate world. Who could ask for a better advocate for following one’s dream?

Every presentation was accompanied by inspiring music and a photo montage. Surprisingly, every athlete’s accomplishments were described by a couple of talented MCs and the event ended promptly at 9:30 p.m. with the announcement of Mikaela Shiffrin, Olympic skier, as the overall Sportswoman of the Year for 2017 in Colorado.

I loved every minute!
Posted by Libby James at 5:18 PM No comments:

The other day a received a note from a man I do not know. Gregg Holley wrote to me about the band his wife Mina plays in. He hoped I’d be interested in writing a story for the small paper I work for about an upcoming Spring Concert.

The Wellington Community Band, 15 members strong, is hard at work practicing for a performance in mid-April featuring favorite music from films. They meet every Monday night at a church in Wellington, a community of 7,000 souls 12 miles north of Fort Collins and the last town along I-25 before the Wyoming border and Cheyenne.

Like several of the small towns surrounding Fort Collins, Wellington is experiencing a growth spurt, for better or worse. But so far, it remains a tight-knit community, proud of its heritage which includes a genuine concern for the importance of coming together to make music and to make friends.

There are no tryouts. Everyone is welcome. Over time members have ranged in age from 9 to 84.  Grandpa Murrell Johnson, tuba, his son Craig, euphonium, and granddaughter Emily, flute, make up one-fifth of the band. There’s a lawyer, a professor, a p.e. teacher, a stay-at-home mom, an accountant, a nurse and an engineer among the members.

Four annual concerts are free, supported by members who bake cookies and sell them at intermission during performances. Change is never a problem. Every item is a buck.

The band got started several years ago when euphonium player Bob Williams decided that Wellington’s Fourth of July parade was suffering for lack of some rousing music. He recruited from townspeople, some who had not played an instrument for as long as 17 years. Linda Anderson stepped up to direct and the Wellington Community Band was born.

After enlivening the Fourth of July parade, their most public performance, the band heads to the park to give a concert. Other concerts are on Veterans Day, Christmas and in the spring. The people of Wellington look forward to every one.

I came away with a warm feeling inside, once again understanding why I keep writing for the North Forty News. It allows me to have experiences that enrich and encourage me despite the national news. 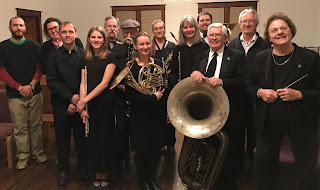 Posted by Libby James at 6:54 PM No comments: