The Bolder Boulder--one more time around 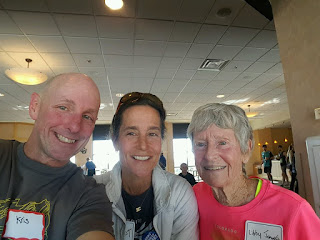 Happiness for me is being only 1.29 minutes slower than last year in the iconic Bolder Boulder 10k run this morning, on Memorial Day. It is also the privilege of running this race through the streets of Boulder and finishing in the CU football stadium. And hanging out afterwards watching a never-ending stream of runners circling the track around the football field to the finish line. It’s a scene I love in the town where my kids were born, where two of them went to college—a place that will always hold a soft spot in my heart. This year I did it with my daughter Jeni who turned 52 on race day and with Jeff White, a good friend who hitched a ride with us and wiggled his way into an after race social event by making like he was related to us.

After a fall and winter of slow-to-no running, I feel so grateful to be back in the game—at any pace. In this mammoth, superbly organized event, I came in #6602nd out of 50,000 or so with a time of 55 minutes, six seconds. I remember a year long ago when I did it 43-something, but it wasn’t any more fun than it was today.

The weather was picture perfect for the 38th running of my favorite race of all time.  I missed a few of those earlier races and right now I’m not sure just how many times I have done the race, but I know I’ve circled Boulder and ended up in the stadium at least 28 times since 1983.

The race is a must-do for so many people. It gets into your blood. It is so well orchestrated that you never feel as if you are running in an enormous crowd. There’s jazzy music almost every block along the way, and belly dancers as well. You can slip and slide, get sprayed with cooling water, and even grab a couple of slices of bacon if your timing is right.

Once the citizens’ race is over, it’s time for the elite competition and a fly over that drops parachutists with American flags into the stadium for a Memorial Day ceremony.

Whether you walk, run, or simply watch all the fun, in my book there’s no better way to spend Memorial Day.

Posted by Libby James at 6:34 PM No comments:

Down and Up and Movin' on

No Sunday run for me this week. My workout was lots more interesting and more breathtaking.

It began where my grandson, David James had lived with Clint and Nick for three years as they worked toward degrees from the Gabelli School of Business at Fordham University.

Saturday’s graduation was a glorious affair. The weather was comfortably cool and the rains held off, according to the college president because a couple thousand Catholic mothers prayed hard that it would. David and his, parents, grandparents and siblings had a wonderful barbecue dinner together afterwards.

And then it was Sunday morning. Parents and siblings had a midday plane to catch and the new graduate had one day to get physically moved to a new walk-up. Dad rented a truck for a few hours. The family had to be at the airport by 1 p.m. That left just a couple of hours to complete the move.

In his new place in the Chelsea area of  New York City. The rent is way higher but the three flights totalling 50 steps up to his door are more uniform and less slippery. You get what you pay for. Well maybe.  His room is window-free and smaller than the one he left..  It’s a location thing.

The altitude is the same.  In the old place, once the bed and desk were dismantled, the clothes, posters, books and “stuff” were tossed into boxes, we carried everything down to the street to be loaded into a rented truck.

What goes down, eventually had to go up. That’s when it got interesting and when the workout really began. I know, I live where it’s a mile above sea-level and having an aversion to elevators, I’ve chosen to use the stairs whenever I could all my life.

Even so, I was huffing and puffing every time I reached apartment six with a load. But after a while, the routine took on a certain rhythm and it got a bit easier.  David and Clint, who carried most of the heavy stuff, were actually sprinting when their load was light enough. They’ve had lots of practice with flights of steep, narrow stairs.

David will be able to walk to his new job with a small, up-and-coming high-finance firm involved with transactions I don’t even try to understand. It’s a dream job for him that happily grew out of an internship during the school year. Who knows where the next move will take him?

He’s grandkid #5 to earn a degree. Seven more coming up. What fun to watch the moves they will be making. 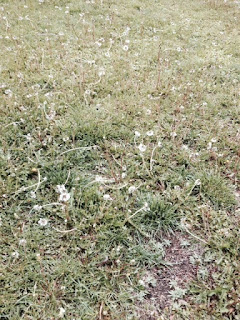 This is what you get if you don't dig 'em.


Every spring, when the dandelions poked their bright yellow heads up out of the ground, I go after them with a vengeance, wielding my trusty dandelion digger.

They probably think I don’t like them, but that is not true. This digging I do early every spring is a therapeutic thing.  For some reason, I feel challenged to dig up each plant as its flower reveals its presence. I think my neighbors probably appreciate my efforts, so that the seeds aren’t around to blow into their yard, but that’s not the most important reason that I dig them up.

I dig them because: I love to be outside. I like the physical effort. It’s a task that offers an immediate result.

The little buggers are so determined that you can’t just get rid of them all one day and call it good. The next day a whole new crop will emerge as soon as the sun shines on them for a few minutes and then I must go after them again.

Cloudy, rainy days are days off from digging because these dandelion blooms are no dummies. They don’t show up unless it’s sunny.

I so admire their persistence. After the first few weeks in spring, my zeal for attacking them lessens considerably. By summer, I’ve told them to go ahead and bloom and I’ll catch at least a few of them when I cut the grass. The rest get to bloom, go to seed and start a new generation.

Somehow or other, there’s a life lesson to be learned from these most humble of plants/weeds. I’m not sure what it is, but it may be worth thinking about.
Posted by Libby James at 12:39 PM No comments: 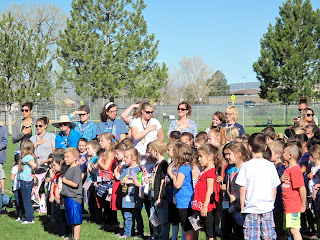 Okay so it didn’t look much like the Olympics. But it was a real kick. Five hundred  kids from Wellington’s Eyestone Elementary School marched single file in time to stirring music onto a grassy playing field, each holding a tiny American flag. They sat down in tidy rows in front of a flag draped podium. Lots of them, and the teachers as well, wore red white and blue.

Okay so the grass was a little damp for sitting, but no one minded. The sun was shining and the sky was a classic Colorado blue. This year’s field day would be an event each child would remember. Adopting  Olympic and patriotic themes, physical education teacher Sandy Fetzer and her team orchestrated a many-faceted event.

Fifteen war veterans took their places on the podium and shared their names and military service. A color guard presented the flag. A talented fourth grader sang a sweet, clear version of the national anthem. There was even a fly over by a couple of model airplanes that turned everyone’s eyes upward as they dove and swooped above the playing field.

Kids held up banners reading “respect” “fairness” “responsibility” and said a few words reminding everyone what it took to be a good sport.

And then the games began. A whole day of them. Twenty-six different stations. Running and relay races, hurdles, a pillow fight on a saw horse, water spray golf, synchronized sponges. Parents, grandparents, kids from the nearby middle school and Air Force cadets from Colorado State University volunteered their time at the game stations.

Okay. So it didn’t look just like the Olympics. But kids could visit an Olympic Village booth for drinks and snacks.  And they were treated to an entire day outdoors moving their bodies, interacting with their friends, probably not realizing how fortunate they were to have an inventive pe teacher, a whole cast of willing volunteers and to live in a small rural town in Northern Colorado where field d ays are indeed a big deal.

Posted by Libby James at 6:53 AM No comments:

I’m no good when it comes to conflict. I can’t help it. I’m a “Let’s all be happy” wimpy sort of person. Always have been. I’m a really bad fighter. I can only work up a decent level of anger about once every ten years. But I wouldn’t be honest if I didn’t admit that once in great while, I have wound up and really let someone have it. Big-time. Always with good reason, of course.

I think there are people in this world who are invigorated by conflict. Who thrive on it. Who need a good argument now and then to feel truly alive. There’s ample evidence of this. Just check out the news; local, national or international. People get their tails in a spin over some of the craziest things that aren’t ever going to matter in the great wide scheme of things.

This week conflict sought me out. I didn’t go looking for it. First I was asked, as a member of the press, to please not attend a public community meeting because, in the words of the caller who requested me to stay away, “Many of the people are angry and might say things they will regret and we wouldn’t want you to hear them.”

Much as I wished I could, I did not meekly say, “Okay. Whatever you say. I won’t come.”  Instead I promised to show up. Then the caller indicated the meeting might be cancelled. “Good,” I said.

The meeting has been rescheduled. I will be there to take down the facts. To record what is said by both sides and to hope that those who speak do so after, not before, thinking about what they wish to say.

Two days later a young friend of mine received a scorching, hateful written communication from someone she likes, respects and appreciates. Devastated, she  asked me what she should do. “Sleep on it,” I suggested. “Then ask to meet and talk.”

No go. “I don’t know what there is to talk about,” the writer replied. A hard and painful lesson learned.

I’m going to avoid the news media for a while. There seems to be more than enough conflict to go around and an incessant need to keep talking about it over and over.

Instead, I’m heading out the door for a run, to get out in this cold, drizzly spring weather. It bites a little but it doesn’t argue.

Posted by Libby James at 6:36 AM No comments: