From tiny beads to big ideas 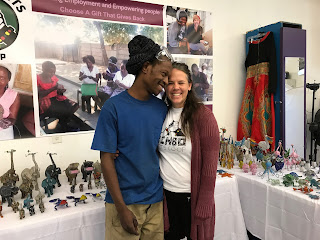 Elly and Waddington Raisi won’t be in town for Christmas this year. Along with their two young daughters, the family will spend the holiday in Zimbabwe where Waddie grew up and where the couple met. They will reunite with family members and touch base with Zimboarts Coop, their enterprise that provides training and permanent work opportunities for Zimbabwean women struggling to raise their families.

I was fortunate enough to meet this couple, now residents of Fort Collins, in the course of doing a story for North Forty News. Every year about this time, I have a moment when the holiday spirit hits. The Raisis did it for me this year. 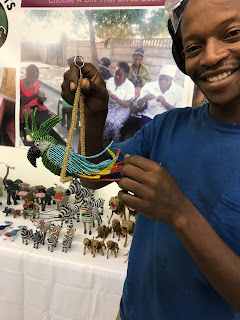 Zimboarts Coop is thriving and all profits from the sale of their beautiful beadwork go to supporting their training/work center in Zimbabwe. The women they serve receive free day care, two meals, and $10 a day while they learn beadwork, traditionally done only by men in Zimbabwe. There’s an after school sports program for kids as well.

In Fort Collins, Waddie owns and operates Hollywood Lawn Service and Elly concentrates on marketing and selling beadwork made by the women at local craft fairs.

Elly is a Fort Collins native who traveled the world seeking adventure until she met Waddie in Victoria Falls, Zimbabwe. He grew up poor and learned the art of beadworking so well that he was able to support himself well. He helped Elly out when she experienced a currency crisis while on her travels and that small interaction changed both of their lives. Their common commitment to make the world a better place in whatever small way they can binds this couple together. They function as if it were Christmas all year long.

Photos: Waddie and Elly pose in their showroom. Waddie showing the parrot he created. In the background, a poster shows the women at work in Zimbabwe.

Posted by Libby James at 7:05 AM No comments: 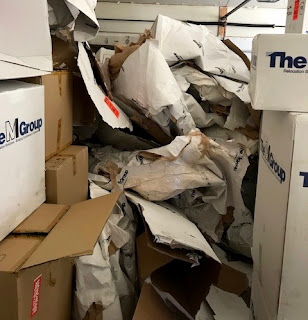 People relocate all the time. Sometimes across the street, other times across a state, a country, or anywhere in the world. When these people move, they take with them their worldly belongings.

Thus the need for “relocation services” that come into your home and go through it room by room with boxes, paper and tape, dismantling, wrapping and packing up every item in sight. The “relocators” are fast, efficient and perform a service much in demand.

During the last few days, as I help a family member with the “other end” of all that wrapping and packing, I’ve had plenty of time to think. I’ve been blown away by the mounds of cardboard and paper that remain when the objects it cared for during transport have been released back into the world. How many trees did it take to produce all this packaging? And what to do with it now? The wrappings get stuffed back into the boxes it came from, in hopes that there’s someone close by who is about to move and will be able to make use of them.

Let me tell you, it is taking a village, or at least a conglomeration of shirt-tail relatives, to get this particular outfit settled into a new house. By the end of day two in the unpacking process, the garage is full of wrapping paper, strips of cardboard, and boxes piled nearly to the ceiling. The debris, stacked up on the front porch as well, in a pile so high that should a wind come by (almost a given in Wyoming) the neighbors would not be happy. So more paper and boxes got stuffed into the garage.

At first, the idea of unpacking is exciting. It’s kind of like Christmas, opening box and after box, and tightly wrapped little package after package. But then, the thrill wears thin.

It’s a relief it is to learn that it’s possible to go to Facebook Marketplace and offer all those papers and boxes to some poor soul that is gearing up to “relocate.”

In a few days or maybe weeks, the unpacking will be finished. No one will be anxious to repeat the process any time soon.
Posted by Libby James at 6:47 PM No comments: 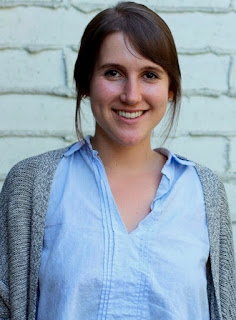 More than 50,000 people are nursing sore muscles this morning. They’re the ones who ran 26.2 miles through New York’s five boroughs during the 47th running of the New York Marathon yesterday, November 5, 2017.

The event began in 1970 when, of 127 entrants on a course entirely in Central Park, 55 men finished and the sole woman dropped out. Entry fee was $1 and the entire budget for the race was $1,000.

The now iconic race has blossomed into a mammoth exercise in community spirit and a symbol of hope and renewal. It was held less than two months after the 9/11 attacks and this year following another tragic event that caused an increased police presence throughout the race. The only time the race was cancelled was in 2012 because of Hurricane Sandy. That year runners showed their support by running together in Central Park.

Among those resting up today after their “long run” is my 24-year-old granddaughter, Abby, who finished her first marathon with a smile on her face and surrounded by a gaggle of her cousins who had come to cheer her on. She had never run more than 17 miles at a time before, but yesterday she chalked up more than 26 miles, no problem.

I was there when she was born, when a goofed-up ultra sound had predicted a boy. She and I did one of her very first runs—all of 20 minutes—around a nearby lake. She has come a long way, baby, and who knows where all she may go!
Posted by Libby James at 8:06 AM No comments: