Is there anyone, of any age who hasn’t played with a yoyo? Remember working to perfect “around the world’ or “walking the dog?” I hadn’t thought about yoyos in decades until last weekend when I found myself in the home of Dr. John (Lucky) Meissenheimer and his wife, Jacquie. Their spacious lakeshore home in Orlando, Florida houses the world’s largest collection of yoyos—that would be 4,251 different yoyos. There are many duplicates bringing the total to more than 5,000. Most are carefully displayed behind glass in elegant locked cabinets for all the world to appreciate. 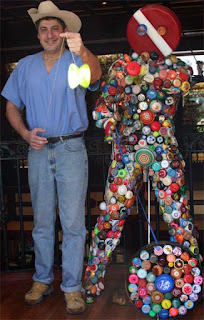 Lucky, the yoyo lover responsible for the collection, built part of his home around yoyos. The collection is reached by climbing a two-flight spiral staircase to the rooms designed especially to display the yoyos. And in one of those rooms, the visitor is greeted by the 6-foot tall yoyo man that Lucky constructed using 603 yoyos.

Also in his collection is the world’s largest yoyo, built by a woodworking class in Shakamak, Illinois. It is 6 feet high and weighs 820 pounds. In order to be officially designated as a working yoyo, it took a 160-foot crane and some heavy duty rope to prove the enormous yoyo was indeed functional.

Lucky is the world authority on yoyos and has published an extensive guide describing their history, the different varieties and their value. A prominent dermatologist practicing in the Orlando area, Lucky is much more than just a yoyo aficionado. For a couple of decades now, he has hosted Lucky’s lake swim, an event that occurs every day of the year. Fifty people or so show up to swim across the lake in front of his home every morning. Weekends the numbers are much larger.

And when he’s not swimming or yo-yoing, Lucky is indulging his fascination with zombies. He holds several awards for books he’s written featuring zombies and their adventures.

How did I get “lucky” enough to meet this man and explore the yoyo museum? He and his wife, parents of three sons, opened up their home to the Dr. Phillips High School water polo teams to celebrate their season and present awards to their talented athletes, among them some close relatives of mine. The ceremony took place on the grassy Meissenheimer lawn with a wide and spectacular view of the lake.

It isn’t every day you get a chance to be transported back to your childhood in such an unexpected way. If you want to learn more about yoyos, google yoyo collection. It’s all there.