The Sounds of Maputo


From where I slept, on the lowest level of a six-level house when I lived in Africa, I could hear the night noises of the city. Rattling cars and small buses bouncing over bumpy streets, dogs barking, and now and then night guards chatting with each other in Portuguese as they walked up and down the street in front of the houses. I heard the screechy bleep of a car alarm and small tinkling noises that I never did figure out.
Maputo street scene 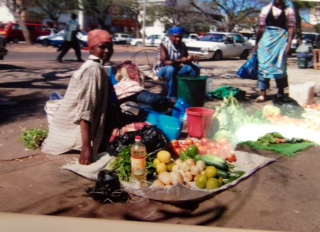 Every morning the soft swish, swish of a palm frond broom sweeping clean a small sandy path just outside my window tells me it’s 4 a.m. and another day is starting. At 6:30 my daughter calls her kids for breakfast. Heeenry, Maaason, Aaaby. The sound boinks up two flights of granite stirs like a Slinky toy in reverse. Noise booms and echoes up and down and all around this concrete house with shiny bare granite floors.

The kids pile in the car and Casamo, the guard on duty, clanks open the iron gate in front of the house. The trip to school includes bouncing over pot holes and slowing to plough through a sandy pit where rain has washed away the road. The big blue school gate opens, the guards smile and wave, and the kids chatter to their friends as they hurry to their classrooms.

In a few hours, midday quiet settles over the house. Olga who keeps everything spanking clean, uses only a rag and a broom. No vacuum cleaner, dishwasher, clothes dryer or furnace to make household noises.

On a Sunday afternoon, the shouts and cheers of soccer fans build to a crescendo, then fade as the game ends. A loudspeaker blares African music as the fans make their way out of the stadium and begin their walk home.

The next-door neighbor leans hard on his high-pitched horn, signaling his guard to come running and open the gate to his driveway. He must be an impatient man. He keeps leaning on his horn until someone appears every time he comes home. And always, the guard takes his own sweet time, his silent way of saying, “What’s the big rush?”

Every evening a strong breeze from the ocean wafts through the windows of the top level of the house where the family likes to gather after dinner. Blam! It slams the metal door shut and makes us jump.

Soon, with lots of clicks and twists, all the doors and windows in the house will be locked and the lights will go out all over the house.  The inside alarm will be set for the night.

I’ll slip into my bed in the basement, pull the gauzy mosquito net around me, and wait for the night noises to tune up.

Posted by Libby James at 7:58 AM No comments:

During the months I spent in Mozambique, I came to love the sensation of navigating my body through soft, warm slightly-salty water in the pool at the American International School, not far from the dazzling Indian Ocean whose shoreline forms the eastern edge of Mozambique. During the months I spent there, I established a routine, swimming for half an hour every morning except Sundays when I swam longer. 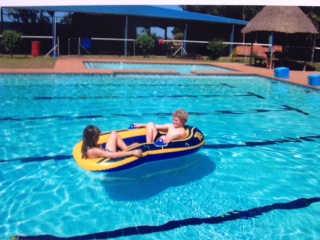 That small body of water, a gated luxury surrounded by desperate poverty, became my haven from the heat and humidity. Would the men who cleaned the pool, pushing their long-handled brushes along the pool’s bottom day by day, ever have a chance to get into the reviving liquid? Can they even imagine what it feels like? Have their ebony bodies ever been totally submerged, I wonder.

I feel guilt at the same time that I feel grateful for this water. I know the pool cleaners earn $500 a year, not nearly enough to feed themselves and their families. And as I swim, the pungent smell of marinara sauce, cooking for the school’s lunch, collides with the acrid stink of burning plastic from a nearby garbage dump. The pool cleaners must smell the same smells. I wonder if they are hungry right now.

I’m into my swim, moving rhythmically, watching the lines on the bottom to keep myself heading straight. There’s a dead frog in the corner, but soon the pool cleaners will take care of it. They wave as I head for the locker room and I thank them for their work as best I can in my pigeon Portuguese.

They will go home to dirt-floored stick shacks draped with blue tarp roofs, limp in the sub-Saharan sun. I go home to cool granite floors and the gentle whir of an air conditioner.

Next morning, I’ll be back. And so will they.

If you have a thing about Africa, I suggest you see the new movie,  A United Kingdom, that was released this week. It tells the story of Ruth Williams and Seretse Khama, an interracial couple who married in the forties. He led the independence movement in Botswana, eventually becoming president of the country. They endured enormous prejudice from both blacks and whites and spent six years in exile before they were able to settle in Botswana. The story has many parallels with my historical novel, White Shadow.

It doesn’t matter how you dress, whether you are male or female, young or old, in Mozambique, if you are white, then you must be rich. And the odd thing is, that in most instances, the conclusion is likely to be true: You are wealthy by Mozambican standards.

It’s a perception among many of the natives that, like it or not, leads to restriction of personal freedom for white people. They must always be aware of where they are and what they are doing. They are at risk of being relieved of money, jewelry, even clothing and shoes. The American Embassy warns of car jackings and home robberies. They suggest keeping car windows rolled up, avoiding night driving and caravanning with another vehicle or two when traveling any distance. “Don’t walk on the beach. Stay away from lower downtown. Take a big dog when you go for a walk,” the embassy warns.

Security precautions are everywhere. Homes, offices and schools are gated and many have electric fences around them. At the American School two men stand guard at the gate, even when school is not in session. You can only enter if you have the right sticker on your car.

Whites living in the city routinely hire full-time guards at their homes. Some are uniformed and carry a gun. Others are equipped with a “panic button” they can press to alert a security service. Most work 24-hour shifts and they range from strong and trustworthy to weak and not so dependable.  They may do light home maintenance, gardening or run errands for their employers. 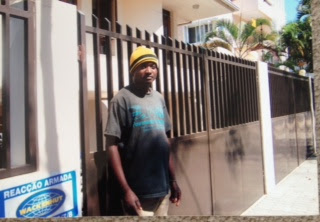 My daughter’s family employed three guards who each earned about $100 a month for part-time work. The cast of characters changed several times while I was there, not without considerable drama. One was fired for stealing. Another came to his second job interview smelling of alcohol. Casamo, the youngest, moved slowly and always looked as if he hadn’t had enough sleep. He loved plants and seemed happiest when he was pruning bushes, weeding, transplanting and cutting the tiny bit of backyard grass with hedge clippers. If the temperature dropped below 70 degrees,  Casamo donned his wool hat and down coat. Even though he only worked every third day, he regularly asked for paid vacation time.

Simon was a skilled handyman. He washed windows, fixed doorknobs, knew how to drive. He had nine children from three different wives. He spoke a few words of English and was anxious to learn more. He and I traded word lists in Portuguese and English.

Before you leave a grocery store, you must show your receipt and have the items in your cart checked against it. It takes some getting used to.

I soon learned where it was safe to walk.  Occasionally I ran in the streets but most of the time I ran within the boundaries of the American School where eight times around the grounds equaled two miles. I did drive at night to attend book club meetings, but I didn’t go without thinking twice about it.

Such a huge inequality gap may give have-nots some sort of unspoken permission to help themselves to a bit of the excess they see among the haves. In the last decade, Mozambique’s economy has improved. Perhaps one day, the fences will come down and the guards will no longer be necessary.

Posted by Libby James at 3:01 PM No comments: