Only a tiny patch of snow remains now in the grassy median strip that runs in front of my house. But a couple of days ago, the strip was covered with a thick layer of wet snow. It was impossible to run on it without getting an immediate case of soggy feet.

Just as I rounded the corner onto my street and moved to the side of the road to avoid the median strip, I spotted a smiley fellow who looked as if he had taken on a massive shoveling job.  “Are you shoveling out the world?” I asked as I passed by.

“Nope,” he replied. “I’m just shoveling a path in this strip wide enough for people to run on. C’mon over.”

That I did and completed my run on a softer, friendlier surface than the one I had planned to use. Creating the path had required a good bit of work. I even went farther than I’d planned to in order to take advantage of the welcoming surface for at least a mile. It made me feel good.

I’m grateful for this tiny moment in my day, made brighter by the action of a stranger. 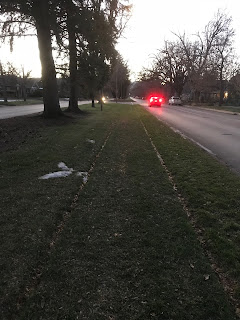 Posted by Libby James at 4:32 PM No comments:

I have been a member of a writers’ group for many years. We started out as a group who wrote for children but over time we have morphed some. We write poetry, novels, non-fiction, science fiction, young adult and children’s stories, and poetry. We are incredibly fortunate to have in our midst a singe male who is a science and science fiction writer, illustrator and graphic designer willing to put up with the rest of us. There are times when we function as a therapy group as well.

Two years ago, we lost Nancy Phillips, one of the most talented among us. She left behind the manuscript for For the Duration, a powerful novel based on her childhood experience. With the help of her husband, a close writer friend, the writers’ group and our talented token male, we are publishing Nancy’s book next month.

Perhaps her story lay untold until now for good reason. It resonates with the current world situation with such gentleness yet strength, that it could not be more appropriate for our time. It ranges widely, addressing the love of neighbors for each other, the touching nature of a friendship between a young boy and girl that endures for a lifetime, and on a larger stage, with issues of race and gender prejudice and the acute pain that can result from a government obsessed with fear to the point where it does, in Phillips’ words, “stupid things.” War-time hysteria caused internment of American citizens of German descent and even resulted in deportations in order to obtain freedom for high-level Americans caught behind enemy lines in Germany. 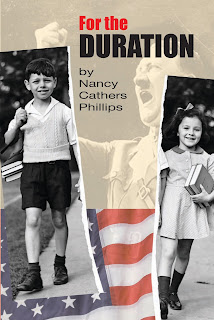 Eight year-old Claire is called upon to care for two brothers, one a newborn, and basically run the household when her mother suffers from severe depression and her father is away at his war-related job seven days a week. When her close friend and neighbor, Carl, and his family, who are of German extraction, suddenly disappear, Claire is heartbroken and wonders all her life what has happened to them.

This experience drives the course of the novel which opens years later when Claire’s granddaughter finds a ring in the attic given to her by Carl more than 50 years ago. “I was nine. It was my first engagement ring,” she tells her granddaughter.

And so the story unfolds, enhanced by Phillips’ skillful dialogue and her ability to keep the reader wondering what will happen next. Claire’s interior monologue enriches the tale. Warning: tears likely.

For the Duration will be available on Amazon.

Posted by Libby James at 9:22 PM No comments:

Leo, my daughter’s lovable golden retriever, was anxious to walk with me until he realized that it would be just the two of us. Try as I might, I could not get him to budge beyond his front yard. He wanted to walk, but not without my daughter, Jeni. If she was staying home, he was too. No amount of tugging on my part could convince him, so back inside he went.

I get it. I’ve been feeling some tuggin’ myself since returning from
Seattle where my oldest grandchild, Adam, and Allison, the woman who has been the love of his life for nine years, orchestrated an incredible, non-traditional wedding ceremony that drew families and friends together. People came from all over the country, from Florida, California, New York, Vermont, Oregon, Wyoming, Colorado, Washington DC, and from all over the world—from Chile, Tunisia, and France. They celebrated together and made new friends. They ate and drank and danced and cheered on the newlyweds as they began a new phase of their life together with a honeymoon trip to Cambodia.

And then we all went home with a whole lot of memories to be treasured and a tinge of sadness knowing that this special occasion had drawn to a close.

Bittersweet. Eleven of my 12 grandchildren were there along with their parents. They don’t get to see each other often, but when they get together it’s no holds barred on enjoying each other. I think seeing them together is my favorite part of being a grandparent. 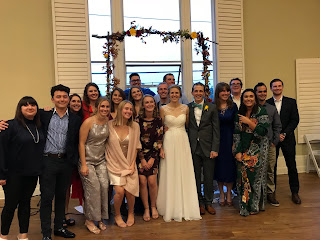 Coming back home after such an event is a bit of a comedown. These kids tug at my heart. I know how Leo was feeling when he refused to leave home.
Posted by Libby James at 2:56 PM No comments: