An encounter in the rain 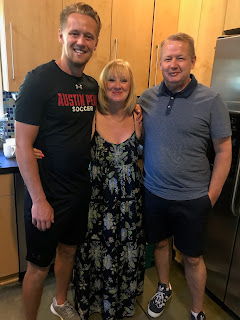 A rainstorm at a campsite in Germany set into motion a series of events that continue to unfold nearly 50 years later. The Rushworth family of York, UK were car camping. The James family of Fort Collins, USA were doing the same close by in their Volkswagen van. As the rain came down, curtailing their activities, the Rushworth and James kids discovered an indoor games area at the campsite. Their parents gathered around a small table in the Volkswagen for a cup of coffee.

That brief encounter set into motion a friendship that has lasted ever since and has been powerfully renewed by Mark Rushworh, his wife Debbie and their son, Jack who came to Fort Collins last week.

Mark was 11 back in 1970 when we first met the family. They invited us to visit them when we were in England a few weeks later. At that time we agreed that when Mark was at the right age, he would come and spend a year with us and go to school in Fort Collins.

In the fall of 1975 he enrolled at Poudre High School for his senior year, an unofficial exchange student. He made the best of his time, getting involved in long distance running and pursing his love of art. When school was out and it was time to go home, we felt as if we were losing a family member.

Four years later Mark was working in the travel industry when he surprised us all with an unannounced visit.  Over time, we have exchange visits as Mark and our kids grew up, married and had children of their own. The bond stayed strong but it had been 13 years since we’d been together.

Mark’s love of the U.S. was so steeped in his son, Jack, that he came to the U.S. for college and is now a soccer coach and candidate for a masters degree here. This past weekend, he got to know the people who Mark had bonded with in 1975-76.

It was like old times. I often think about how that six-month trip to Europe we took has influenced all of our lives.

Thank goodness for a pouring rain that made us pause for a morning and get to know each other.

Posted by Libby James at 7:32 AM No comments: