I have to give a talk this week. Or should I say, quite a long time ago, I was asked to give a talk to the seniors at Rocky Mountain High School in Fort Collins.  I said yes, I even before I asked what they wanted me to talk about. Turned out to be “your life story and knowledge.” Whoa! A big order.

After pondering just what a bunch of high school seniors antsy to get out on their own in the world might like to hear from an old coot, I thought maybe nothing. Who knows how many of them will even show up?

I decided to talk about The Importance of Passion. The word has a whole array of definitions, one or two of which just might pique the interest of teenagers, right?

In the name of doing a little research, I listened to a sermon at the Unitarian church entitled What Is Your Passion? But it didn’t help me much. It suggested having a passion for life and in doing so think, thank and act. I needed a few more specifics.

The talk is to last 45 minutes-way too long to blab on about myself. Fortunately, I came across Tim Shea’s new book A Day Like Any Other: All American Tales. I know this guy. He gradated from Rocky Mountain High School the same year my older son did. He’s never written a book before. He’s been a football coach, a truck driver and is a talented storyteller. He’s a keen observer of the small events that make life meaningful and a few years ago he began sharing his encounters on Facebook. A writer friend and fellow Rocky Mountain graduate turned his words into a book.

So, I’m going to talk about Tim and his book and share a couple of pieces from it with the high school seniors.  And I’ll talk about my passions as well—sitting down writing and standing up running and the hassles and joy inherent in doing both.

In one of his pieces, Tim flips through a yearbook and tells his son stories about what his classmates are doing more than three decades after graduation. I believe it may be enough to scare them, them challenge them, at least make them sit up and take notice. Maybe they will even take a look at their own personal passions with an eye to pursuing them with increased enthusiasm.

That’s what I call a passion.
PS- 1-25-16. The talk went well. I left with great admiration for the current crop of high school students.
Posted by Libby James at 12:10 PM No comments:

Out with the old, in with the new

When I was six or seven, I reportedly said to my mom, “Nothing lasts. Not even people.” Hardly an astute insight, more like a sudden realization on the part of a small child. Last week I got a notice that our local newspaper will no longer be publish a column under the heading “The Running Life” that appeared in the Monday edition every week for several years. Four of us took turns contributing to it once a month. The paper is undergoing lots of changes and dumping their “Your Health” section is apparently one of them.

I had an angry moment because I love writing this column. I’ve been doing it for more than three years. None of us got paid, but in some ways, that did not matter. I think all of us liked the opportunity to share stories and information about our favorite sport and we got a kick out of the feedback we received from readers.

But then I realized that “nothing lasts, not even free-for-the-taking newspaper columns,” and that no-one would be keeping me from writing about running whatever and whenever I felt like it. Things like a blog and Facebook would allow me to share my thoughts and observations whenever I wanted to.

I didn’t run a step this weekend. After a long time away from the place, I was lucky enough to spend the weekend in Steamboat Springs where there are piles and piles of snow and lots of opportunities to be out and play in it from cross-country and downhill skiing to snowshoeing and hiking snow-packed paths. I did a little cross-country, a snowy hike and fell happily into an outdoor hot tub for a long, leisurely soak.  And all of it with good friends who shared their lodging, hospitality and good food.

I came home relaxed, invigorated and game to step out my door for a morning run where the piles of snow in Fort Collins are slimming down. Still I’m guessing it will be March before all the cold slippery stuff has disappeared. No matter, at least now it’s possible to picked your way around most of it.

The year is still very young. It’s going to be fun to find out what it will bring. What will end, and what will arise, shiny and new.

Stay fit with a bit

A genius of a name. It rhymes. It’s short. It says it all. And apparently, it is becoming a “must have” item if you’re serious about maximizing movement in your life. Or to be more accurate, if you are serious about recording your activity minute-by-minute including: the steps you take, the distance you cover, the calories you ingest, your heart rate, how well and how much you sleep, the number of “active” minutes you spend in a day, what time it is, your BMI, the weight you lose and the muscle mass you gain. I’ve probably missed a few things like caller ID, music control and GPS tracking-- but you get the idea.

I’ve heard that a FitBit can tell you when you’re sick—even what is the matter with you, but I haven’t verified those claims. Some models give you feedback—they smile at you when you do something right. They can sync automatically with your phone, IPad and computer or Bluetooth so wherever you are, whatever you are doing, you can be in touch.

Warning: Choosing a Fitbit is no easy task. That “FitBit” word is the name for a whole family of fitness products designed to keep you motivated and improve your health by keeping track of your everything.

Described as “wearable technology,” most of them are worn around your wrist, but you can find models that attach to a bra or t-shirt if wearing it on your wrist is just too much of a constant reminder of what you are or are not doing or should or should not be doing moment by moment.

Surprisingly, the FitBit was not the first product of its kind. Forerunners include apps like Apple Healthkit and Google Fit, Microsoft Band, Apple Watch, Android Gear, MyFitnessPal, RunKeeper and EveryMove.

FitBits can energize one’s competitive instinct. One area hospital issued FitBits to all staff and employees and challenged them to “outFit” each other. A nurse moved into the lead by attaching his FitBit to the collar of his hyperactive dog. Another ran hers through the washing machine. It survived and she emerged as head of the pack.

What happens if you wear two FitBits?  Can you double your fitness along with your fun? Just wondering.

Hey! No wisecracks intended. I’ve long believed running guru Amby Burfoot’s assertion that “There is no failure in running or in life as long as you keep moving.”  I just think you can do it without a tracker on your wrist.

Posted by Libby James at 8:19 AM No comments:

Below is a piece I wrote in September 2000, more than 15 years ago. It’s kinda fun to reminisce. 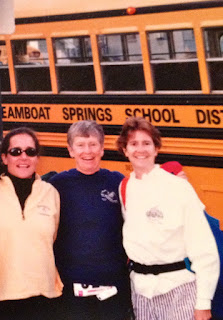 In 1984, at age 47, I finished my tenth marathon in a personal best time. I said then it was time to hang it up. But that was before my younger daughter proposed a “family marathon” last Christmas. It’s hard to say “” to your kids however old they get.

Even more meaningful than the actual event was the training we did together, as much in spirit as in actuality. We live in different states, but we burned up the email and telephone lines sharing training schedules, aches and pains and triumphs like completing our 20-mile runs. This year for Mother’s Day, my daughters gave me a running hat and a water bottle with a strap for carrying on long runs.

Family members drove us to the start in the dark, watched the little kids while we ran and greeted us at the finish line—the County Court House in Steamboat Springs, Colorado, with loud cheers, snapping cameras and goofy awards.

I think we’ve started a family running thing. In August, Kristin, her 10 year-old daughter Amy and I ran together in the Cheyenne, Wyoming Race for the Cure 5k. In September, Kristin’s husband, Tom, 40, will run his first marathon in Logan, Utah joined by first-timers sister Tracy, 45, and brother Adam, 38. Their mom is coming all the way from Hawaii to watch.

I was never prouder or had a better time than I did when I ran 26.2 miles with my two daughters…

Epilogue: …unless it was when I joined my son Kurt for the Tokyo Marathon in 2012. It’s very hard to say “no” to your kids. I think they’d better quit asking.

Posted by Libby James at 5:21 PM No comments: