Creatures of the Culture

I am on fairly intimate terms with a certain group of young people, ages 20 to 29. It is my continuing pleasure to see them growing up, getting educated, making friends, travelling the world, interacting with each other and beginning to settle into the world of work. They are in many different stages right now. But one thing they have in common: They are creatures of their generation.

Seems to me we all are. Many college kids in the 1950s, when I went to school, tended to pair up early, go through the dating, “pinning,” and engagement process and then marry shortly after graduation. Of course not everyone followed that scenario, but it was a common trend that I bought into without giving it a second thought.

I started dating my husband-to-be in October of my senior year, got pinned in January, engaged shortly after that and married in August, two months after graduation. I taught school for a year, then had my first child in July. By age 28 I had four children. It wasn’t until my husband died when I was 55 that I experienced real independence. That included holding down a job, buying a house, a car, having my own bank account and deciding for myself where I wanted to travel and how I wanted to live my life.

It is too soon to see if my theory will apply to those at the younger end of this group. Still, I think it is interesting to reflect on how times have changed. These young people will have a world of experience behind them if and when they decide to “settle down” with a permanent partner.

I was asked to write a piece for an "Aging Gracefully" newsletter and this with what I said.

I always said that when I turned 70 I would quit running. But then I turned 70 and I was having so much fun running that I decided to keep doing it for a while. During the eleven-and-a-half years since then I have been continually entertained by the world of masters running and I’ve learned a whole lot.

I’ve had to admit to myself that I am addicted to this business of putting one foot in front of the other, inserting a little bit of a bounce to turn it into a run. Walking is great and I do lots of it, but it is not the same as running.

I’ve had to concede that I am getting slower and that I can’t run as far as I once did. At the same time, I’m so grateful that I can still participate. These days I have to dress warmly. I run more slowly so I don’t warm up the way I once did. 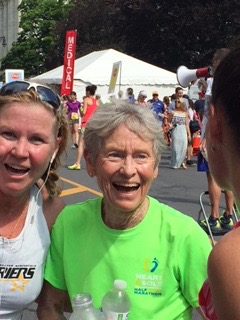 I’m getting used to having few competitors in my age group—sometimes none, which was the case in a recent USATF 8k Masters Championship in Virginia Beach on St. Patrick’s Day. I was the only woman, but there were two men in my age group. I did that race a little faster than they did. That was pretty much fun.

The older one is, the better their chances of winning the “age-graded” award, determined by a mathematical formula that combines a runner’s time with their age. In Virginia Beach I won that award with a 99% score which came with a check for $600. The race took me almost 43 minutes—not a bad rate of pay!

The Fort Collins Coloradoan took note when I won a world age-group record for the 5k a couple of months after I turned 80. But when the same thing happened in a much more difficult 15k race in Tulsa, Oklahoma three weeks later, no one noticed.

I’ve discovered that Grandview Cemetery down the street from where I live is a great place to run. The surface is dirt, flat and traffic-free. Lots of others runners and walkers have discovered it too. Reading gravestones can be quite interesting. I’m getting to know some of those people. I like it that none of them comment on my pathetic pace. They just let me do my own thing.

I guess I must be addicted.

Posted by Libby James at 3:49 PM No comments:

I did it! Last night I let loose of the manuscript I’m calling Still Running? I’m not at all sure that it was ready to pay a visit to a prospective publisher, but I was ready to say goodbye to it for a while. I had massaged it to the point where I had to stop. A few kind friends had read it and shared some extremely helpful suggestions for which I am grateful.

The publisher I sent it to said that it gets so many submissions that I should be prepared to wait for eight to ten weeks. Then, if they have an interest in it, they will let me know. If they are not interested, well I’m on my own to check the calendar and then move on to the next step.

From the day when I started this project I have been planning to go the self-publishing route. I’ve done it four times in the past and it works well for me. But just on a whim, I decided to send it out into the big bad world and see what might happen.

It consists of sixty short pieces covering many aspects of running from the people I’ve met, the places running has taken me, the role it has played in my life and reflections about the sport as it has grown and changed over time.

Last Sunday, I made the Still Running? title true by running in the Flying Pig 5k, a fundraiser for Foothills Gateway, an organization that serves those with disabilities in Fort Collins. The wind was blowing like crazy, as it usually does during this mid-April race. Four hundred souls turned out to walk or run and support FG. They all went home with a T-shirt, zippered bag containing some goodies and an evergreen tree, ready for planting. Afterwards they were treated to hot drinks and bacon bagels.

I was lucky enough to walk away with a pair of socks covered with flying pigs that have already taken their place as favorites.

Stayed tuned. I’m looking forward to seeing my thoughts about my favorite sport see the light of day. Meanwhile, I’ll keep on running. 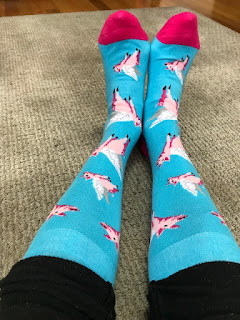 Posted by Libby James at 3:16 PM No comments:

Yesterday I responded to an invitation to talk about…used tea bags…. I was the program for a PEO group in Fort Collins. I don’t know what those letters stand for, but I do know that it is a philanthropic women’s organization that provides college scholarships to deserving young women.

One of their members is a fan of my teabag note cards and it was she who hooked me up with the PEO group. I’ve been making “oldBags” note cards and bookmarks for at least ten years now. I sell them in a couple of local shops, at Beavers Market, my local grocery store a block down the street, and from my home. I also take orders and mail cards to purchasers.

I started making the cards after I received one I fell in love with made by women in a village in South Africa. My cards don’t look anything like theirs, but the one I received so long ago was certainly my inspiration. This little card read, “Once filled with tea, now filled with love.”

The cards are simple to make and they satisfy my penchant for making something out of nothing. I begin by drying out the tea bag and emptying its contents into my compost pile. When I have a pile of tea bag papers, I iron them and then glue them onto blank cards with craft glue. I sprinkle a few gold flecks around the edges, add a border and then use the stain created by the tea to create a design. Sometimes I add flowers, trees, birds, whatever seems to work.

I never dreamed that this fun little craft activity would be worthy of a talk.  Making cards from use tea bags is something anyone can do. It’s just that not everyone wants to spend their time messing with used tea bags 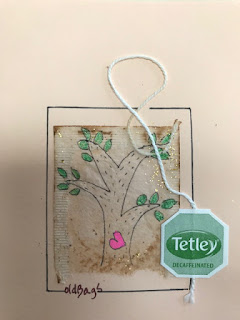 Posted by Libby James at 8:46 AM No comments: