Every morning, whether I feel like it or not, I put my body through a few paces. No going out the door, no eating breakfast until they are done.  Some stretches, a little core work in 15 minutes, and that’s it. I’ve been doing the same routine for a very long time. I’m pretty sure there’s nothing wrong with it.

But last Saturday morning I was introduced to a whole new level of body shaping and strengthening by Stephanie Petty, who has bcome personal trainer for three of my relatives.  In a little over an hour, I began to understand why all of them are so high on her. Even though in the last months, I’d been noticing changes in them, I didn’t buy into their lofty claims for Stephanie.

The “noodle” of the group is now standing  straighter, has a six-pack and visible muscles in his upper arms. Amazingly, he recently led the way on a family 10-mile hike and said he loved it.  Another said goodbye to years of back pain and the third reached a goal weight and had a radical improvement in his golf scores.

Now it was my turn. Stephanie is a certified personal trainer with a degree in kinesiology and a passion for changing peoples’ lives. She pushes, but not hard enough to make you cry. She explains why you are being asked to do an exercise in a certain way, all the time offering encouragement.

Yikes! I don’t mean my words to sound like a blatant ad for Stephanie’s services. I just want to share my first experience with a passionate and knowledgeable personal trainer. She’s based in Cheyenne, Wyoming with a local clientele. She is in the process of organizing an online 22-day abs challenge. It’s available without charge to anyone who signs up.  Let her know if you are interested at stephaniepetty2012@gnail.com. Could be fun to give it a try!

One of my favorite chapters in Still Running is the “Diversities and Determination” chapter that tells the story of how Athletes in Tandem came to be. It happened because, after completing an Ironman Triathlon in Louisville, Kentucky in 2008, Dennis Vanderheiden decided he was through chasing personal bests. He realized that satisfaction for him came from experiencing the joy of others as they completed an event. For him, the thrill was in the journey, not in the finish.

He knew also that his joy would be enhanced if he could share the journey with someone unable to do it on their own. Inspired by Dick Hoyt who pushed and pulled his disabled son Rick through an amazing 72 marathons and 255 triathalons, six of them Ironman distances, over 37 years of competing, Vanderhein founded Athletes in Tandem.

His non-profit recruits volunteers and supplies equipment to make it possible for those with disabilities to participate in running, biking and swimming events. Vanderheiden says there’s a story behind every athlete. They may not be able to speak, but their sounds and gestures express their elation at feeling the wind in their hair, cool water on their bodies and kudos and camaraderie from fellow athletes.

AIT now has a presence in locations from New York to California and people from all over the country seek Vanderheiden’s advice. 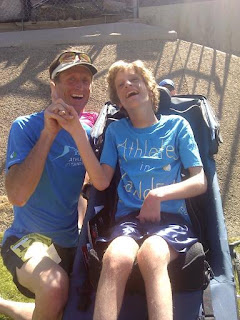 Last Monday night I was lucky enough to attend a showing of Lessons from Zachary, a film presented by Athletes in Action that documents an epic multi-day bike ride in the Colorado mountains which Vanderheiden and Zachary Scott, who cannot walk or speak, completed together. It sounds kind of lame to say it was inspirational, but that’s just what it was. 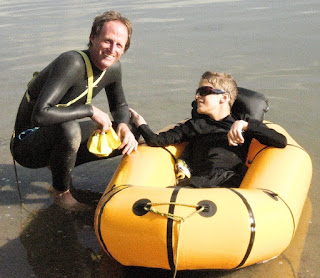 Zachary’s mother, Sandy Scott, made the challenging ride with them. She’s the author of the book, Lessons from Zachary, available on Amazon and through her website.
Posted by Libby James at 6:55 PM No comments:

Diane and Pat McCary, ages 76 and 78, completed the three Ironman distances in Kona, Hawaii to commemorate the 20th anniversary of their performance in 1998. That year, along with their daughter Kristen and son Mike, they became part of the first family of four to ever complete the Ironman together. This year they took their 16-year-old granddaughter, Autumn, along to enjoy the fun and allowed themselves a week to complete the Ironman distances--a 2.4 mile swim, 100-mile bike ride and 26.2 mile run.

They needed to make a few adjustments to get the job done. “The traffic was so bad that I only did about 30 miles of biking on the roads,” Diane explained. The rest she accomplished on a stationery bike. “So boring,” she said. “But I did it.”

The ocean was so rough that they were forced to do some of their swim in a nearby pool. They divided the run up into several segments and allowed themselves a “walk-run” option when that was necessary.

It was the consistency of lifetime training that made this possible," Pat said.

They spent their time in Hawaii staying with old friends. They heard stories of four miserable months of thick fog caused by the erupting volcano. At last, the air is clear, but record high temperatures were a bit of a shock to the Colorado mountain residents.

“We feel completed,” Diane said. “Afterwards we celebrated with friends. And we’re happy to be home.”

A four-inch snowfall in Allenspark greeted them on their return. Bob Laird, former medical director of Ironman took the photo. 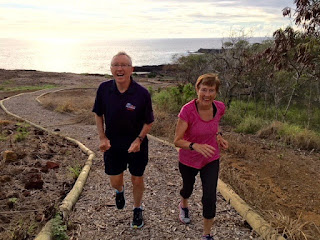 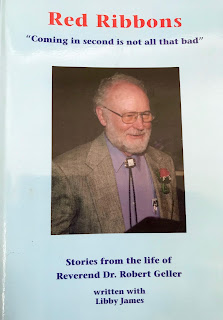 Ten years ago, a little book titled Red Ribbons chronicled stories from the life of the Reverend Dr. Robert Geller, long-time campus minister at Colorado State University. I had the privilege of working with him to see the book come to life. His death at age 97 on September 22, 2018 brought back a flood of memories.

Bob Geller and I spent a good bit of time putting his stories together. We fell into a routine: He’d start talking and I’d start scribbling, usually for a couple of hours. Then I’d type up his words and deliver them to him the next time we met.  The process went on until we had a completed manuscript. Working with him was one of the best writing experiences I ever had. He didn’t change much. He knew what he wanted to say and he said it. Best of all, I got to know this extraordinary man.

The book’s title grew out of his tendency to come in second. Its sub-title explains, “Coming in second is not all that bad.”  He was salutatorian in his high school class, beaten out for the top spot by his girlfriend at the time. At Hastings College in Nebraska, he graduated second in his class and at McCormick Theological Seminary in Chicago he had the second-best academic record.

“We reserve our hero worship for those who win, not for those who “almost” win,” Geller wrote. “By the time my formal schooling was over, the handwriting was on the wall. And the message had some undeniable advantages.”

Red Ribbons describes his ecumenical bent by relating the story of his Jewish great-grandfather, Conrad, who wanted to become a police officer in Boston. “You’d better become a Roman Catholic if you want to be a cop in this town,” a wise old Bostonian said to Conrad. He did, but his brother remained Jewish.  Geller, who grew up on a Nebraska farm, has Jewish cousins and second cousins who are retired Catholic priests.

Geller’s amazing memory makes for great stories. He remembers enjoying the company of 20 lovely young ladies as part of the cheering squad at Hastings College. As a senior he crowned his track career with a 4.21 mile, a college record at the time.  He was a life-long lover of sports.

His dad, who had a gift for profanity, turned the air blue the day 16-year-old Geller announced that he planned to be a minister.  “My God, you’ll starve,” his dad insisted. He went to college, studied economics and speech, having been advised to study something he was interested in, saving religious study until he entered seminary.  He credited his knowledge of economics and early habit of saving money with his ability to create a comfortable retirement income. His dad need not have worried.

Geller recalls ministerial stints in rural Paw Paw, Illinois, West Virginia, the reason why he quit smoking, his decision to enter missionary work, his time at Oklahoma A and M, and at the University of Arizona, in Sierra Leone, and in 1962, his arrival as campus minister at Colorado State University where he served for 28 years.

In 1967 he began what is surely the longest running book group in Fort Collins. They met regularly at 7 a.m. every Friday morning in the basement of 629 Howes St. intending to read in all the academic disciplines. The Friday Morning Book Group is going strong to this day. In 2007 Geller celebrated the fortieth anniversary of the group by sharing the titles of more than 500 books the club had read. Geller attended book group until the day before his death.

Over the years, he wrote poetry for special occasions and to record insights that were important to him. A chapter in Red Ribbons shares several of them, concluding with  A Sending Forth, one he often used to close events where he spoke.

Go in love, keep your faith,
Give your faith away.
Laugh often, make peace,
And hang loose.
So be it. Amen and Amen.

Posted by Libby James at 1:19 PM No comments: