Until I spent time in Africa, I didn’t think much about roofs. They were just always there, and I have taken them for granted. They don’t demand attention unless they leak. Common expressions like “a roof over your head,” “raising the roof,” and “hitting the roof,” refer to a structure that protects and provides a barrier to bounce off. Wherever and what ever they are, roofs are the layer above that keeps out the elements.

Before I even knew Joe, who works in my family’s home in Maputo, he and his family had a roof—a piece of blue plastic stretched over sticks bound together to form the walls of the home he shared with his mother, wife and four children. One day the wind blew hard and Estella, Joe’s wife, called him to say that their house had blown down. Joe went home to see what he could do. 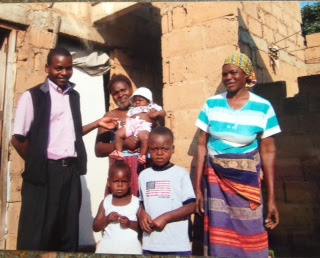 A year later, when I met Joe, things were looking up. He had replaced his stick house with a larger, concrete block structure with a central living room, a bedroom for he and Estella, one for his mother and another for his four children who slept huddled together on a blue tarp that covered the dirt floor. But only the master bedroom had a roof. When violent rains came, the family took cover in the only roofed room, happy to know while their new house might not be waterproof, it would not collapse leaving them homeless.

Joe is a jack of all trades. For my daughter’s family, he cleans, irons, chauffeurs kids, stands in line to pay bills and stay current with the never-ending blizzard of paperwork generated in bureaucratic Mozambique. He knows where to go and how to get things done.

In his free time, he works on his own house. Africans typically build their houses a little at a time, as funds allow. When a sudden windfall found Joe with enough money in his pocket to roof his whole house, I felt so good. Total cost for 17 strips of corrugated iron for his roof; $145.

Back home in Colorado the following June, I sat at my bedroom window watching as chunks of hail bounced off the lid of my hot tub.  To date, I had not had to make a major investment in maintaining my home.

A few weeks later a fellow come to my door wondering if I’d like a free estimate for a new roof.  I hadn’t even looked up, never thought that those hail stones might have wreaked havoc on my roof. I agreed to an estimate which came in at $8,000. I talk with my neighbor, who also needs a new roof. He tells me I can get one for $5,000. Four months later, I have a new roof, paid for with a check from my insurance company.

My new shingles keep out the rain and sun, wind and snow. I can’t stop wondering what strips of corrugated iron might look like covering my little bungalow.

Posted by Libby James at 9:52 AM No comments:

Due to circumstances beyond my control, I haven’t blogged in quite a while.  I’ve missed it! Last Sunday afternoon I had an unusual experience that I think is worth sharing.

The event, billed as a “Women’s Wisdom Circle,” took place in a beautiful home with an awesome view in the foothills west of Fort Collins.” Along with several others, it was the brainchild of coach and author Sandy Scott, women in their late forties-early fifties curious about what to expect as they aged.

Four of us in the 70-to-80 age range were invited to take part in a panel discussion in hopes of sharing some of what we’d learned, how our attitudes had changed, and what we felt were the best ways to live our lives as we grew older. It was a big ask. It sure gave me some food for thought.  Wondered what in the world I had to share that might be helpful to the group of 25 or so women gathered to hear what we had to say.

Each of us began by sharing a brief biography. The four of us were strangers until that moment, so we all learned a great deal from each other. These women and had travelled all over the world, been involved in all sorts of volunteer and career activities, and all of them had children. Three of the four of us were widows. Two of the panel members were legally blind, but had we not been told, we would not have known. Their lack of vision has not slowed them down one bit.

Molly Johnson, a skillful moderator, guided us through a series of carefully-thought-out questions. They are worth recording here along with some of the answers we gave.

1. What is a topic not often discussed about the aging process? Two of us popped up with the same response, the fact that as you get older you are often invisible in a group. This isn’t always a disadvantage. You don’t have to worry so much about how you look and what you wear. Chances are, no one is going to notice! I find that I often get unasked for advice about how to do things I’ve done hundreds of times.

2. Since age 50, what personal attitudes and choices have been the most beneficial to you?. These panelists were active women who swore by the need to not “retire” from life, but to stay engaged, to continue to volunteer and pursue interests. Those with sight issues had simply found ways around them. Friends drove them places. They still travel. One woman with sight issues, along with her husband, is on her way to Botswana to fulfill a long-held dream.

3. How have you preserved a sense of identity after 50? The other woman with sight issues wondered if she could live alone and continue her intensive work with Boys and Girls Clubs after her husband died. She decided she could and continues to derive great satisfaction from her work with young people.

4. What strengths have you discovered about yourself in the last 10-20 years? My answer to that one was to keep plugging away at projects until they get done. I believe in consistency therefore I exercise every day.

5. How large a role has service to others played in your life since 50? All the panelists have continued in their volunteer efforts. Service to others is important to them and they now have more time to serve.

6. How have the hopes and dreams of your younger self evolved after 50? For me it has been the completion of an historical novel. I’m a journalist, not a fiction writer and it was hard!

7. What taboos have you broken since age 50? Nobody really wanted to answer this one! I guess I might say that being an “old-lady runner,” may not be breaking a taboo but in some circles it’s well, just kinda weird. And I love it!

8. How have you preserved your sense of self and your relationships? For me it has been through my writing job with a small monthly newspaper and through nurturing friendships through running and writing.

9.  As you observe women aging, what are some of your observations? How have you stayed emotionally and physical healthy?  I do see some women who have stopped doing things. I often hear, “I don’t cook any more.” I’m not a good sitter, so I have a need to keep busy.

10. If you could give your 10-to-20 year younger self advice, what would it be? We ran out of time before we got to this one. I would say I wish I had been more assertive, more able to say “no” when I really needed to.

A huge thank you Sandy Scott and to moderator Molly Johnson who kept us on track, and for all those who came up with these insightful questions. Plenty to think about for all of us.

Posted by Libby James at 3:30 PM No comments: