The Curse of Frugality

Following a blog I wrote called The Curse of Frugality, I got some advice from members of my family about some good ways to waste money. Granddaughter Ellen told me that she had spent $50 on nail polish--for a gift-- $70 on a long dress she didn't know where or when she'd wear it, and something called an adventure picnic where she hired a company to contact restaurants and order take out meals, then sends the recipient clues that when solved reveal the name of the restaurants. Then you walk around and pick up the food that has been ordered.

Another g.daughter thought a Halloween costume for her dog might be a good idea. This is a special dog--purchase price: $1, 500!

...and more... Go to Hawaii. Buy a Halloween costume for your dog. Order 6 bagels instead of one because ordering one makes you feel like a loser.

Posted by Libby James at 5:04 PM No comments: 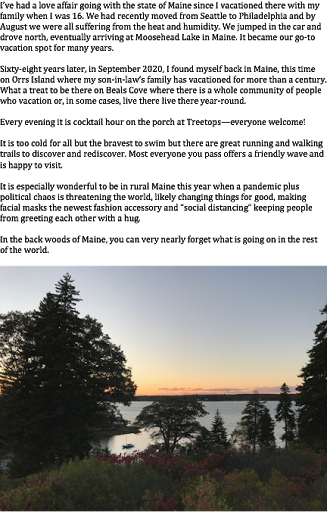 George, my mother’s younger brother, was a tool-loving kid. He was so attached to his hammer that he named it his boodle-do and took it to bed with him every night.

The youngest of four children, his dad died when he was only four and he soon became the fix-it man in his family.

He was born in 1910 in Harold Wood, Essex, a suburb of London, and lived an extraordinary life.

As a young man, he joined the army and was sent to France during World War II. He survived the battle of Dunkirk and swam into the English Channel where he was picked up by one of the British pleasure boats on rescue missions in those choppy waters.

He arrived on British soil with a pair of trousers, a pair of socks, a towel, and nothing else. In the pocket of his trousers was a water-soaked 10-pound note which he gave me.

He spent the rest of the war with the British troops in Burma and India. He came home with a nasty case of malaria and a big khaki hat with a turned-up brim that my brother and I thought was the coolest hat we’d ever seen.  We called it his Burma Hat.

It took him several months to recover enough from malaria so that he could return to his work as an engineer. In the meantime, he became interested in genealogy. He created a family tree going back to 1712, recording information in his precise printing on a big role of blueprint paper. It is a treasured record of our family and I have it still.

When he served in India, his commanding officer tired of writing letters home to his wife. He asked George to begin writing to her. He more than obeyed those orders, to the point where he and Peggy became more than just pen pals.

When the war was over and he was sent home, George went immediately to see her, and before very long she was “in a family way.” My cousin Georgina was nine months old before Peggy’s divorce was finalized and she and George were able to marry.

After Peggy died, George fell into a depression he could not shake. Finally, Georgina insisted that he embark on a cruise to the West Indies. It was to change his life.

Aboard ship he met Joanna Rodriguez, a widow and a travel agent based in Mexico City. She agreed to visit him in England.  He ended up returning to Mexico with her where they intended to marry. The ceremony almost didn’t take place because George could not provide the necessary documentation—Peggy’s death certificate.

“Ah, time is short, we must marry,” Joanna insisted. The authorities relented and the ceremony took place before they returned to England.

Even though she found herself a long way from home and in a very different culture, Joanna came to love England and found joy in making George happy.

About to turn 61, George announced his retirement explaining, “Being married to Joanna is going to be a full-time job.”

I inherited my lousy sense of direction from him. When he got lost on the way to his life-long home from the London’s Heathrow Airport, he breathed a sigh when he spotted Big Ben. “Ah, now I know where I am,” he declared.

George wore an old necktie around his waist instead of a belt.  When the temperature got to 80 degrees, he slept in a little summer house at the end of his garden.

He played golf until he was 86, taking great pleasure from the friends he played with. He died in 2001 at the age of 91 with Joanna, his wife of 30 years, by his side.

I feel fortunate to have had such an uncle.

Posted by Libby James at 4:34 PM No comments:

Two hundred and fifty-one days of the year 2020 AD are gone. One hundred and fourteen days remain. On this dreary, unseasonably-cold day in September, I am inclined to wish that this year would simply hurry up and get gone.

What a silly thought! Every day, especially as one gets older, is to be treasured, savored, and enjoyed. Yet maintaining an authentic and lasting positive outlook has become a challenge during this year of a world-wide pandemic caused by a sneaky virus that we don’t understand very well and that has flown the whole world for a loop.

The pandemic is impossible to ignore. We mask up before we go anywhere outside our homes. Many of us don’t leave home at all, choosing to order groceries online and have them delivered, and giving up any opportunity for human interaction.

When we are out and about, we work hard to remember to stay six feet apart which makes us appear to be unfriendly when in reality we’d like nothing more than to give a friend a hug or to simply engage in some chit-chat with a stranger we encounter on a walk.

More and more frequently, we meet, and take classes, and share our thoughts and concerns online. It’s better than nothing, but communication via an electronic device can’t hold a candle to all that we gain during an animated, in-person interaction.

And yet, as long as we are still present in this old world, vertical and capable of taking nourishment, we gotta hang in there, do our best to be in touch with each other, keep smiling, and looking toward a day when Covid-19 has faded into a disconcerting memory.

As 2020 draws closer to a close, perhaps we’ll find new ways to appreciate each new day. It won’t be easy, but there’s no doubt that it will be beneficial to each of us and to those around us.

Posted by Libby James at 3:03 PM No comments:

This afternoon, in the course of preparing to make a batch of blonde brownies, I opened a kitchen drawer, glanced down, and breathed a long happy sigh. There, in plain sight, was the tiny, round gold earring I had been searching for. Yesterday, I found the backing for the earring on the carpet in the middle of my kitchen floor, so I knew the rest of it was probably close by. Earrings don’t stay long in an ear with no backing to hold them in. I went over the whole carpet carefully, then moved on to the hardwood floor in the rest of my kitchen, wiping it down with a damp cloth. No luck.

This little beveled (bumpy) gold ball has a history that goes way back. It was made in Birmingham, England by Payton Pepper and Sons, a jewelry firm owned by my family for many years. I bought it there when I visited fifty years ago. I always chuckle when I remember that as a stockholder, I was invited to be part of the Payton Pepper board meeting while my husband was politely asked to sit out in the hall.

Long ago, I lost the mate to this earring, to my great chagrin. After searching for it, I gave up and bought a reasonable facsimile from a local shop, but it was smooth and had none of the beveling of the original. Even so, it served as one of my go-to earrings that I wore almost every day.

About a week ago, I glanced in the mirror one morning and saw that one of my earrings was gone. Of course, it was the beveled one. I hadn’t gone out of my house. I knew it had to be somewhere between the bedroom, bathroom and kitchen. But it is such a small, sneaky little thing. I had no luck finding it. I put on another pair of earrings and told myself not to be so foolishly obsessed with trying to find it.

And then last night the backing showed up on my kitchen floor, and silly me, I was on the hunt again. Imagine my surprise when that earring showed up this afternoon among the forks and spoons in my kitchen drawer. I’ll never know how it found its way there, but I’m grateful.

Once again I have a pair of go-to earrings—one beveled and British, the other smooth and American. And that’s okay. After all, I am half British and half American, but not beveled on either side as far as I know. 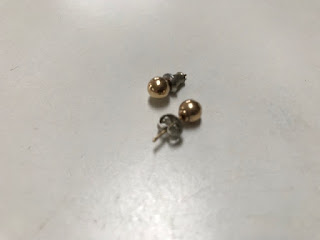 I haven’t been on the road much lately so when my daughter Kristin invited me to tour Wyoming with her, I was ready to go!  We set off from her home in Cheyenne on a Sunday afternoon headed to Casper and then on to Lander, where she once lived. It was too hot for anything more than a walk around the border of the town. There was so little traffic, so little activity that we began calling it “the quiet town.”  We had hoped to hike in Sinks Canyon where the Popo Agie River vanishes near the mouth of the canyon but the heat kept us from doing that.

Then it was on through the beautiful Wind River Canyon, heading north toward Thermopolis, home of the world’s largest hot springs—not a tourist attraction with great appeal as the temperature approached 100 degrees!

Our next stop was Meeteetse, (Indian for meeting place), population 397 and the home of one of Kristin’s good friends where we were treated royally. Our hostess has deep roots in Meeteetse, owns quite a bit of property there and serves the town’s Episcopal Church as its priest. Meeteetse is also the home of a gourmet chocolatier who sells his products around the world.

Then on to Cody—Buffalo Bill country and a taste of the old West. Another of Kristin’s friends had us for lunch.  Afterwards we headed back toward Cheyenne, a six hour trip where there was lots of opportunity to appreciate the many miles of grasslands and lack of any sot of human development.

Over the many years that she has lived in the state, Kristin has come to love the place, its people, and the wide open spaces. “It’s a well-kept secret,” she says.  I don’t expect she will ever leave. 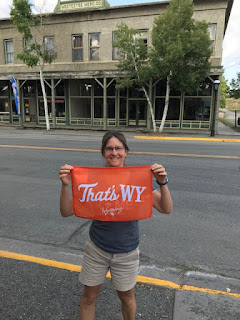 Kristin in front of the Meeteetse Mercantile on Main Street

Posted by Libby James at 7:13 PM No comments: