I don’t know how I managed to leave my jacket behind when I loaded up my backpack for a trip to Albany, New York to run in Friehofer’s Run for Women. But I did. And I didn’t really need it until race morning which was a little cool.

When I asked the nice lady at the hotel desk if I could borrow a jacket from their lost and found for a couple of hours, she had a better idea. She gave me a very nice, but very large suit jacket which kind of swallowed me up.

One of the highlights of this all-women’s 5k which draws well over 3,000 runners and has been a premier national race for 39 years, is the presence of Joan Benoit at the race .For those of you who aren’t into the world of running, in 1984 she won the very first women’s Olympic marathon in Los Angeles. She’s 60 now, and shooting for an under three-hour marathon in Chicago this fall. Quite amazing! Most importantly, she has been a long-time advocate and supporter of her sport for all these years. And she is totally humble and unassuming.

She must have thought I looked pretty funny in that men’s suit coat, among all the elite runners warming up in their state-of-the-art running gear. She asked someone to take our picture. That was a kick for me! 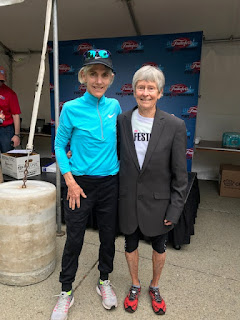 I have admired you & your family of dedicated Persia of high integrity, for decades.