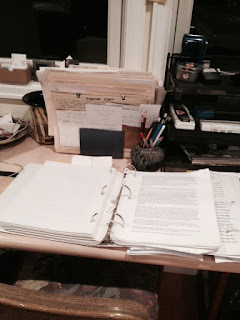 I am embarked on an exercise in self-discipline, determined to plug away until I finish a manuscript I began more than a decade ago. There is a very good chance that this piece I’m working on is an exercise in futility but I refuse to relegate it to the filing cabinet because I believe it is a story that needs to be told. It’s just that some days I’m not so that I am the one to tell it.

The factual basis for the story, which I’m calling White Shadow, grew out of a time I spent in Mozambique, a country that was a Portuguese colony until 1975, many years after most of colonial Africa had become free and independent. It began as non-fiction and has now morphed into historical fiction and therein lies the problem.

I’m not a natural fiction writer and I struggle with the dialogue and detail necessary to bring characters to life. I’d like to believe that it is not impossible for me to do this. What I do know is that it is not easy.

I’ve learned a whole lot in this process. I’m accustomed to whipping off eight or nine hundred word journalistic stories fairly quickly. Writing a book-length piece is a whole different bag. Because there is no deadline, I tend to write and re-write and then get tangled up in the various different versions of what I’ve written. And then there’s the matter of remembering what I wrote in say, chapter three, when I need to refer to it in chapter nine.

How in the world did people ever write books before the existence of computers? They may be frustrating at times, but I can’t imagine the torture of writing by hand or typewriter when corrections become such a tedious problem.

As the first week of August begins, I’ve decided to set aside two full days to work on this long-delayed project. I’ve considered leaving home and finding a hideaway—a friend’s mountain cabin or even the public library but I’ve rejected that idea because everything that I need is close at hand in my home.

Now. Will it be possible to ignore the phone and doorbell, the weeds in the garden, the beans that need picking, the laundry that needs washing? Hmmm. We’ll see. I also wonder how long I can manage to keep my seat glued to the chair, my eyes staring at the screen.

It could be a huge bust, but I’m going to give it a try.
Posted by Libby James at 8:33 PM No comments:

Early Sunday morning is the best time of the week for a run. The world is still asleep and it’s quiet out there. Alone with my thoughts, I decided that I have a growing appreciation for silence, especially for the absence of words either spoken or heard.

In the last couple of weeks, I’ve had a chance to learn more about the Quakers and their often completely silent church services. On the occasion when someone is moved to speak, they must first carefully consider their motive and keep their words brief; one-to-three minutes. No responses allowed. A Quaker meeting is not a discussion group.

Recently, two sons, two daughters, two daughters-in law, two sons-in-law, six granddaughters, six grandsons and a special girlfriend gathered for an intense couple of days of acting and reacting with each other. There wasn’t a single moment of silence until they shipped out, on their far-flung and separate ways.

Only in the silence that descended following their visit, was I able to reflect and fully appreciate the person each of the grandchildren has become. Only two of them were alive to know the grandfather of them all, and they were so very small. In a quiet moment after they were all gone, I had time to reflect on the part of him I can see in each of them, more and more clearly as they become adults. He left his mark in unexpected ways.

I think I watched or heard way too much of the Republican National Convention last week. It left me in need of quiet. I suspect the Dems will do the same this week.

It was my conversation with Meg, who invites a small group to her home each week for silent meditation and who spends about a quarter of her life not speaking at all that sent me on this silence kick. She’s been attending silent retreats for as long as two months at a time for 30 years and the practice has sustained her for all that time. “I wouldn’t be here today without silent meditation,” she told me.

It is interesting to me how uncomfortable moments of silence can make us feel. Lulls in a conversation can be downright disconcerting. Sometimes I find myself making senseless idle chatter to fill the void. I hope I can do that less often.

On the road this morning, I didn’t talk. There was no one to talk to. There was no one for me to listen to. I came home renewed. Sometimes less is more and nothing at all just may be the very best.
Posted by Libby James at 1:23 PM No comments: 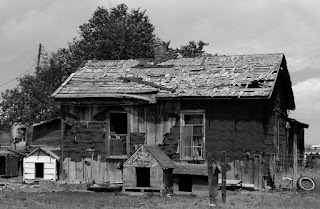 This place popped into view on my bike ride this morning.

I have an on-going fascination with deteriorating dwellings and I’m not sure why. Some, like this one on North Taft Hill Road out of Fort Collins, where urban turns to rural in a big hurry, I can visit every so often and watch as the place dissolves slowly into the ground.

The creepy vine-covered, tree-shaded stone house I saw a couple of months ago in upstate New York, I won’t see again. It doesn’t matter where they are, how tiny or enormous, each one captures my imagination and gets me thinking.

Who chose this spot to build on and why?  How long ago? How many years did they stay? Why did they leave? Did they raise a family here? Who owns it now and do they care about its history and its welfare?

The Little House by Virginia Lee Burton is my all-time favorite children’s book. It’s probably responsible for my affection for broken-down, abandoned old houses. A little house built way out in the country becomes surrounded as the city encroaches but stays, abandoned, just where she was built. “This little house shall never be sold for gold or silver,” said the man who built her. “She will live to see our great-great-grandchildren’s great-great grandchildren living in her.”

And so she sits, uncared for, until she is rescued and moved by a descendant of the man who built her, to a hillside way out in the country. She gets repaired and becomes livable again.

I guess I must be imagining the potential in these old houses. Maybe one day someone will come to their rescue, fix them up and make them useful once more.

I’ve always thought it would be fun to scout out a dozen of the most pathetic old houses around, photograph them and create a calendar. Maybe the Board of Realtors would be interested. Housing bargains are hard to come by in these parts.

Bye bye niners. (Those moving through their last year in a decade and wondering what’s coming next.) This is the second morning I’ve opened my eyes knowing that I’ve moved into a new decade. Yesterday I celebrated with an out-of-the-ordinary-hard four-mile run with a son-in-law, a granddaughter and her friend. Short but heavy on the altitude gain. I was just happy that I could do it. No better way to start the day, especially a birthday.

This morning I delivered the tail end of a group which included my children, their spouses and a dozen grandkids, to the airport and back to their various lives.  These “kids” came from New York, San Diego, Seattle, Washington D.C., Tokyo, Cheyenne, Orlando and Fort Collins, to celebrate my birthday. I love them for being willing to do that. I love them even more for the extreme hilarity they generate when they all get together. A little nightlife, some Frisbee, swimming, silly games—they did it all—and then they went away. 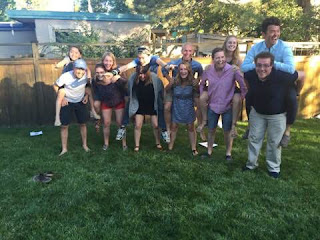 Eleven of them are between 17 and 27--two will finish high school this year. Five are through college—in grad school or law school, embarking on a gap year or setting out on a career; two are in college, and Brenna, the youngest at eleven, will be in the fifth grade. She’d hardly seen these cousins for many years but, no matter. She instantly became one of the gang and wasn’t about to miss any of the action.

It’s pretty quiet at my house right now. Don’t get me wrong, I’m liking the quiet and the time to reminisce a bit, to appreciate all the good times of the last few days. So many great memories.

I never thought I’d rejoice when someone beat me in a run, but on July 4 it happened when Abby, nearly 23, beat me in a 5k run. Turns out she’d been secretly training for six months. Well, it paid off. She blew by me before mile one and I didn’t see her again until the finish line.

As far as I’m concerned, the number one benefit from long-term running is setting an example for children and grandchildren and it sure came home to me at that moment. A few days later, I barely kept her in view on that uphill birthday morning run. I think she’s hooked.

What fun it’s going to be to watch her in action. 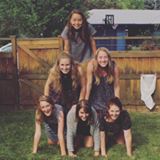 Posted by Libby James at 1:01 PM No comments: 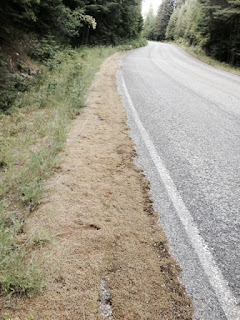 Now and then there’s a break, but for much of the way I ran on a carpet of moss growing along the side of the road. A little faded from its normal deep green because it has been dry for a few days here, but it is nevertheless a  spongy-soft and blissful running surface—for old feet—or for any feet.

I had no idea where I was headed as I turned off Copper Bay Cut-off, a dirt road, onto the main road heading north alongside Priest Lake in Idaho. It turned out to be a dream run, pleasantly cool, starting just before 7 a.m. on this last day of June.

How I got lucky enough to be here, I’m not entirely sure. It has to do with my son who lives in Tokyo who brought three Japanese friends and colleagues to northern Idaho on a golfing vacation. We are all staying in a spectacular, four-level home overlooking the lake, owned by another ex-pat whose family has summered on Priest Lake for more than a century. He has a long-term love affair going with the place.

I’m not a golfer which means that the long afternoons/early evenings are 100% free time for me to do as I please from reading, napping, taking an icy dip in the lake to scribbling a bit.

My Mickey Mouse running watch being out of order, I gauge my morning run by the mile markers. A couple of them seem to be missing which makes my run a bit longer than intended and me especially grateful for the mossy track.

I think it takes getting away from familiar surroundings and tasks to wholly appreciate free—really and truly free—time with no deadlines, real or imagined—bugging you.

When the golfers return, we pile into the motorboat for a trip down the lake to a waterside restaurant. There’s a late evening sunset to awe us on the trip home.

Life IS good. An experience like this makes me want to take every chance I get to hit the road.
Posted by Libby James at 12:58 PM No comments: