Getting together with Old Friends

Be prepared, if you decide to go to your 60th college reunion. If yours is a college where the graduates in attendance march through the campus in the order in which they graduated, you will be dangerously close to the end of the line. There were more than 40 of us who graduated in 1958, but there were only a few stragglers behind us leading me to believe this was likely to be our last roundup.

I’ve only been to two other reunions at Ohio Wesleyan University in Delaware, Ohio, home of the Battling Bishops, my 25th and 50th and overall, I have not been an active alum. Yet, it was such a kick to be there and to renew friendships from so long ago.

The university has grown and prospered. We were treated royally and spent Saturday night having a fancy reunion dinner together. We each received a booklet with photos of us all as freshmen in 1954. Some of us were even recognizable.

After the weekend festivities, seven women who have been special friends through all the years spent a few days together, something we do every other year. Once a dozen, we are now only nine and three of those were unable to make it to Delaware.

We’ve been pretty organized in our gatherings over the years. This time, when one of us asked, “What’s the agenda?” no one had an answer. We really didn’t need an agenda because the point was to just be together, to hang out, to eat and talk and take a little nap in the afternoon, to reminisce and to laugh, which we did plenty of. We’re a little goofier now than we once were and we also have a new awareness of the necessity for humor.

Sandy touted a restaurant/bar in Waldo, a little berg up the road from Delaware that specializes in fried bologna sandwiches. “You’ve got to try one,” she insisted. And so we piled into one car and off we went.

These sandwiches are serious business. The hunk of bologna is more than a quarter inch thick, fried until kinda crispy and served topped with cheese and sweet pickles. It’s a sandwich with some heft to it. Sandy remembered them as going for $2.85. They’d gone up to $4—still a deal, if not for the food, then certainly for the atmosphere. The place was filled with customers and wait people who had obviously been feasting on these favorites frequently and for a long time. The place made a nice contrast with the fancy, white tablecloth dinner we’d been served at the reunion. 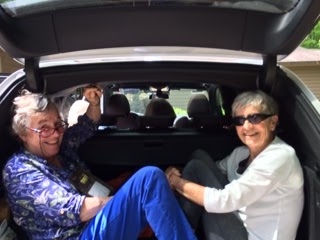 These gatherings get more precious every time we meet. It’s going to be next to impossible to get us all together again, but we will probably try because we’ve been getting together to talk and laugh since 1986 and we’re not ready to quit—not just yet.
Posted by Libby James at 8:50 PM No comments:

First bike ride of the season

I almost forgot. I tend to zero in on running and ignore the cool blue bike that sits in my garage waiting for a passenger. But not today. It was a day I had planned to run but then I got an invitation to go for a bike ride. I’m so glad I said yes.

The weather was perfect and the Power Trail leading south from Fort Collins to Loveland is a treat. Miles and miles of traffic-free cruising with lake and mountain views and the occasional hill to make it interesting. Just a tiny spring breeze to make a long-sleeved shirt comfortable. A nice wide path making it possible to visit much of the time. Early enough on a weekday that there was very little biking or walking traffic. Enough twists and turns to make it just a bit challenging if you didn’t know exactly where to go.

The world is green again and now in all its glory. Weeds have not had a chance to become overgrown and enormous. Fruit trees are in full and gorgeous bloom.

A few campers had settled in to spots around Boyd Lake. Maintenance crews were out trimming weeds along the trail and repairing a roadway here and there making a couple of detours necessary.

We did a 35-mile round trip which seemed plenty for the first ride of any distance for the season. In a week or so, I’d like to ride the trail again just to see if having done it once, it might seem  easier than it did today.

Just to make sure we knew it was a bike trail, one inventive soul had created a wall of old bikes along the trail. A much better solution than relegating them to the junkyard, I thought. 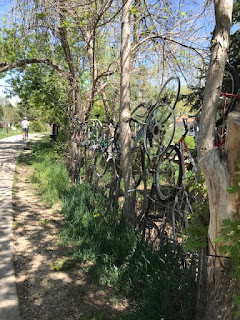 Posted by Libby James at 4:01 PM No comments: 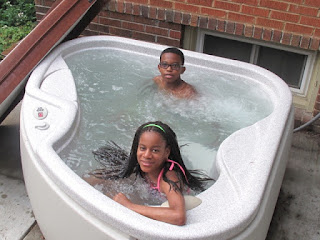 In the course of putting together a little book I’m calling Still Running, I spent a few hours yesterday looking through most of the 7,000 photos on my computer in search of a few specific ones that I needed. My task was made tedious because I had failed to name most of them—in fact didn’t even know how to do that until a few months ago.

It was a long and boring job punctuated by some bright moments when I ran across memorable pix. One of those moments was when I came upon Marcia and Rui Benfica’s son and daughter hanging out in the hot tub in my backyard. I got to know Marcia when she had done her best to teach me some Portuguese when I was in Mozambique more than a decade ago.

A few years after I was back home, my good friend, Hope Cassidy, organized a fundraising effort in Greeley, Colorado for a school in Mozambique and Marcia, then living in the U.S., came to Colorado to help promote it. We had a fun visit. The school got built.

I couldn’t resist sending the photo to Marcia. I got an immediate reply. She enjoyed reliving that memory and reported that the kids are now teenagers attending high school in North Potomac, Maryland. Rui, who has a Ph.D in agricultural economics from Michigan State, now works as an international development economist in Washington, DC.

Marcia’s exciting news is that along with her husband and three friends, she is spearheading Mozambique Orphans Charity, a new non-profit organization whose mission is to provide education, job training and meet the medical, emotional and spiritual needs of orphans in Mozambique. I remember how many orphans there were in the country when I was there, many as a result of the AIDS crisis.

“I’m so happy and very motivated doing this. It’s a dream come true,” Marcia wrote. On Friday, May 4 she will speak about the organization on the Voice of America radio. The first fundraising event is scheduled for June 16.

Marcia comes by her passion quite naturally. Her dad was an Anglican pastor. She has worked in expat relocation for the World Bank and was an active Rotary Club volunteer in Maputo.

The website is beautifully done. Check it out at: http://www.mozambiqueorphanscharity.org/
Posted by Libby James at 9:53 AM No comments: