My friends, Diane McCary, 76 and her husband Pat, 78, used to live in Hawaii. Now they live in the Colorado mountains, but they’ve never forgotten the years they spent running, biking and swimming on the big island. They worked, too, she as a high school math teacher, he as a psychologist. Whenever they could, they indulged their athleticism, so much so that it became contagious. Their daughter Kristen and son Mike became triathletes as well.

In October 1998 the four of them did the Ironman together. They each swam 2.4 miles in the ocean, biked 100 miles, and followed up with a full marathon, 26.2 miles. It was a milestone in all of their lives.

In October, 2018 Diane and Pat will be back in Hawaii to watch this year’s Ironman. And while they are there, they will do their own version of the event to celebrate the 20th anniversary of their milestone event. They’ve given themselves a week to do the above distances at their own pace. Because of jobs and family obligations, the kids won't be there in person to join their parents.

Here’s how the McCarys are preparing. They work out 45 minutes to an hour and 15 minutes every day, increasing their running, walking and swimming time as the time draws closer. Pat spends hours on the stationary bike. Diane rides weekly. In June they did a two-day mountain biking trip together. They also work out regularly in the pool.

Pat has had prostate surgery, a hip replacement and lives with bone-on-bone in his ankle. Diane says, “I function with a lot of worn out parts. We both make the best of what we have left. " She quoted her father-in-law who said, “I’d rather wear out than rust out.”

Stay tuned. I plan to report on their week in Hawaii in October. 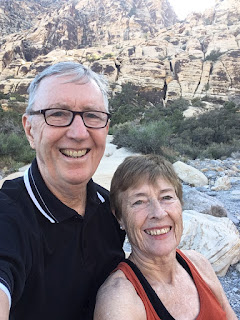 And meanwhile—“keep on truckin’.”
Posted by Libby James at 10:31 AM No comments:

On the street where I live 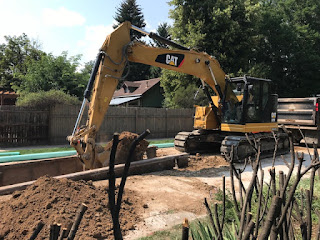 It’s the middle of August and last Monday morning a lone white car showed up, parked close to my house and the man inside it just sat there…waiting. Before long others showed up and before I knew it the narrow street that borders my house to the west was swarming with bodies wearing flourescent vests, ready to go to work.  They brought with them all sorts of big machines that I can’t name properly but that were capable of cutting holes in the concrete street, breaking it up into huge chunks and scooping it into a dump truck to be hauled away. Crash, bang and rattle. The work was hard, looks dangerous and was loud enough that all of them wore earplugs. Soon they were busy digging deep into the street to reach the old water main.

That was the day I’d planned to haul away two big truckloads of branches from my backyard but the chances of even getting a truck into my driveway but I thought the chances of even getting a pick-up truck into my driveway were not looking good.  I was wrong. The workmen were gracious enough to allow my friend and his truck to pull in and even helped us to load it, not once but twice. No doubt hey were happy to have us out of their way as soon as possible.

Replacing the 100-year-old water main on my street is going to take several weeks and during that time I will have no access to my garage. It is a tiny price to pay for the privilege of observing these workers from Connell Resources as they go about their business. They are on the job by 7 a.m. and don’t leave until well after 5 p.m. They pause only for a lunch break during a long hot day of strenuous work. When one of them noticed me hauling my groceries from my fairly faraway parking place, he offered to help.

They are self-sufficient, having brought along a porta potty, ice chest, and even a big trash bag.  They seem so skilled at their work. Eventually they will remove all the concrete from the street and when the new water main is in, they will replace the surface with asphalt. I can’t imagine how all that process will go, but I am anxious to watch as it unfolds. By then, I’m betting we’ll be friends.

It seems like such a whole lot of work and effort to update this utility. And my street is only one block out of a whole city that must be suppied with a  reliable supply of water.

I will never again take the flow of water from my faucet or my shower or my dishwasher or my washing machine or my toilet for granted.

Posted by Libby James at 8:39 PM No comments:

Billed as a “community run,” the Mountain Avenue Mile in Fort Collins more than lives up to its billing. It’s all inclusive featuring divisions for fun runners, a children’s competitive race, open males and females, a “beauty and the beast” division for men and women over 40, and a 4-person relay.

The race was started, and for many years organized by Jane Welzel, a nationally-known runner who made her home in Fort Collins and devoted much of her time and energy to supporting running. Her life was cut short four years ago, but two races and a track workout she established continue in her honor.

I love this race. It starts a block from my house on Mountain Avenue. It’s held on a weekday evening in August. Runners gather to enjoy each other’s company and to cheer each other on. The course goes east on Mountain Avenue toward town for most of the way, then takes a left turn to finish close to a small park. Party time at a local restaurant follows.

Long distance runners don’t often get a chance to compete in a one-mile race. Going all out is a different, and at least for me, a pretty painful experience. But how much fun! I had quite a few years’ “experience” (as in more than 40 years) over the youngest of the 37 over-40 runners, but no matter. It was a kick to participate.

2018 drew the largest field ever. Thanks to the loyal volunteers of the Fort Collins Running Club, the Mountain Avenue Mile is here to stay.

Eight-year-old Riley posed with her mom, Andrea before the start of the kids' competitive race. She did a mile in 8:40!

Below the open men get ready to go. The winner did the mile in 4:32. 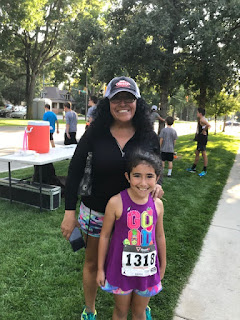 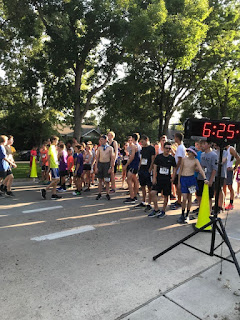 Posted by Libby James at 9:03 AM No comments:

The generous season has begun. Apples are falling off the tree, begging to become applesauce or apple pie; the cucumbers are hiding out under big leaves and growing way too big; the tomatoes are ripening all at once; the green beans need picking every day; the basil needs trimming and converting into pesto. I won’t even mention the squash that has seen fit to take over my compost pile--way beyond its assigned territory. And all the while, the weeds are following suit—growing like crazy overnight.

Such a bounty. And it all comes at once.  I’m thinking our job is to harvest all we can, process and freeze as much as we are able, then share with friends and neighbors before we dig in and devour what’s left with joy and appreciation. 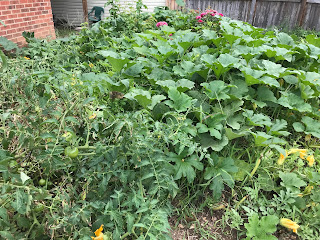 This time of year, I don’t go to the grocery store as often. My diet changes. I get a kick out of making meals from what my grandson calls “yard food.” It’s not always his favorite fare as he leans toward burgers and fries. But it is only temporary.

Soon leaves will fall, frosty nights will put an end to the growing season and the massive growth in my backyard will disappear. It is was great fun while it lasts, made more precious by the fact that it will not be around for long. 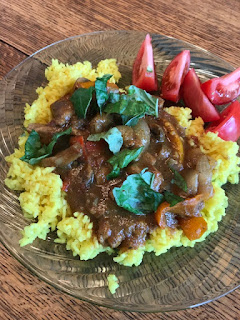 Year-round garden bounty might be a bit too much to take!
Posted by Libby James at 12:28 PM No comments: