The lid of the hot tub

This old dog just learned a new trick and it sure does make me happy.

I’ve been a hot tub addict for a long time now. Eight years ago I got a new one, probably the smallest size made. It’s an odd “kidney” shape and in a pinch, two people can enjoy it at the same time. I love it.

Lately, the lid has become saturated with water and difficult to move. Not impossible, but not easy.

Figuring that after eight years, I’m probably due for a new one, I went on a search. I checked with the company I bought the hot from and I checked a couple of online sources, concluding that I’d need to spend between $415 and $449 to buy a new one.  Of course, there were more than several options from “economy” to “deluxe,” to “ultra.”

It was not easy to make comparisons. I wanted a good quality lid and I wasn’t sure how to choose the best one for my purposes.

That was yesterday. This morning I went for a long walk and at about mile three a thought popped into my mind. Even though I’d read that there was nothing you could do about water saturation in your hot tub lid, I decided to ask Mr. Google if there might not be a way.

Eureka! There is a way. Unzip the vinyl cover. (I had never bothered to notice that the vinyl lid did indeed have a zipper surrounding it.) It came off quite easily revealing a two-piece foam core. One side was quite light. The other was very heavy, a bit of a puzzle.

The two foam pieces are now residing on my patio in the Colorado sun which I hope will soon bake the water out of them. The inside of the vinyl cover was a bit slimy but easily scrubbed clean using an anti-bacterial cleaner. Then I placed the vinyl cover over the hot tub to keep out insects and debris during the drying out period.

Unless I have an impossible wrestling match getting the two foam cores zipped back into the vinyl cover, I’ve saved myself some cash and had a fun time doing it. 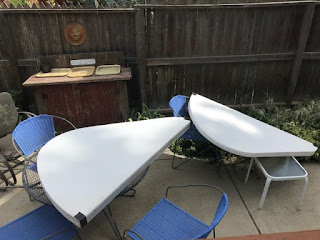 Posted by Libby James at 2:41 PM No comments:

Not surprisingly, she works with lots of runners. And being a chatty, social soul, she gets to know the people she works on. One of them, Chris Reynolds, mentioned that she had a close super-runner friend coming to town who was temporarily sidelined with a nagging hip issue and she was looking for a way to show her a good time.

Tina thought that it might be fun for Chris, her friend Bev and I to get together. She figured we’d have plenty to talk about, and she was right.

That’s how there came to be a knock on my door this morning and two fit and charming ladies appeared bearing a beautiful bouquet of flowers.

It was instant connection. We talked about running and races and people we knew in common. We talked about our families. I learned about their careers as runners and coaches and how the running gene had filtered down to their children.  We chattered on like old friends. I neglected to offer them even a drink of water. We were too busy talking.

Bev Dockerty was on her way back to St. Paul, Minnesota that afternoon, so our time was short. We managed a whole lot of getting to know each other in a single hour. I decided that having a passion in common paves the way for instant friendship. 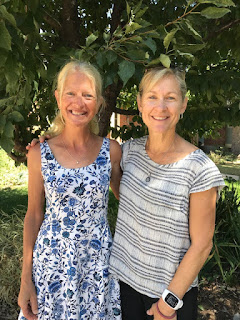 Here’s a photo of Chris on the left, and Bev, in my front yard. May they soon return!
Posted by Libby James at 6:50 PM No comments:

The power of stories

Alexandra Fuller, author of Don’t Let’s Go to the Dogs Tonight, said of writing, something like this:  When we are gone, all that is left of us is our stories. That may be why many of us can’t shake the writing bug.

I stand in awe of Chimamanda Ngozi Adichie’s  Americanah which I just finished reading and put down reluctantly because I had come to the end of it.

I took it with me to Malibu, California where I spent a memorable weekend with family and friends remembering the life of Celestine Favrot Arndt an extraordinary woman whose oldest son is married to my daughter.

In all the years that I knew Cely, I seldom spent any length of time with her but somehow that didn’t matter. We had these children and grandchildren in common and we talked—on the phone--via email. We were friends.

We didn’t talk about the illness that eventually took her life. We had other things to discuss. Last Christmas she sent me a flowing white jasmine plant that hangs from my living room ceiling. Who knows how it survived the U.S. mail in winter, but it did, and I am so grateful to have it.

Cely stories poured out all weekend, from her brother, sisters, four sons, granddaughter, partner of 25 years and his son, and the wife of her oncologist with whom she had become a close friend. We heard stories from her workout group. We learned about her adventurous nature and time spent raising a family in Sri Lanka, Taiwan and India, and her falling in love with Bhutan. No one was surprised to learn that among her last words were, “Don’t send money. Just make sure you vote!”

Her life ended at home, with dignity and humor, surrounded by her children, all of whom have stories to tell that will go on for years.

I’m guessing that hearing about her life made many of us present re-think our own.

Stories can do that. 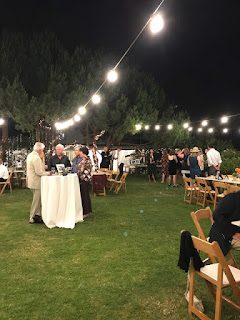 Labor Day, Sept. 3, was the second running of the Fortitude 10k race, in Fort Collins, an event orchestrated by the Bolder Boulder team that has been creating the Bolder Boulder 10k, a race that celebrated its 40th running this spring, attracts 50,000 runners, and is known as one of the nation’s top running events.

Fort Collins is lucky enough to be the site of the first event outside Boulder ever put on by this amazing Bolder Boulder team.

This year’s event attracted close to 6,000 runners who cruised through the streets of Fort Collins, ending up in the new CSU Canvas Stadium. The citizen event was followed up by an elite “chase race” in which runners started according to predicted finish times. Among the group of elite runners in the race was a special group of “army athletes” based at Fort Carson in Colorado Springs.

Among them was Susan Tanui, a native of Kenya, now an American citizen, who is in the army and runs races as an “army athlete.”  We met when she sat down next to me during a lunch the day before the race. We hit it off right away.

I happened to mention that I had a very good friend in Fort Collins who is a native of Kenya. After the lunch we shared contact information and went on our separate ways.

Later in the day, I was speaking to my Fort Collins friend from Kenya about an unrelated matter when I mentioned Susan and ended up sharing Susan’s phone number with her. “I’m sure she’d like to be in touch with you, but better wait until after the race,” I said. “She’s probably pretty busy.”

Because Fatima is Fatima, she called her right away. Next thing I knew, she had invited Susan and five male “army athletes,” all from Kenya and in Fort Collins to run the race, to come to her house, and would I like to come over?

It turned out to be a very special evening. Fatima and her husband Mark magically hustled up a wonderful meal and we sat around a big table on their back patio sharing stories. Each person took their turn to explain a little of their history. We got to know each other. Turns out Fatima and Susan are both from Eldoret, the home of so many famous Kenyan runners.

Susan went to college in Dallas, Texas and Anchorage, Alaska, is an All American runner and currently the only female in the army athlete program in Colorado Springs.

I felt so privileged to get to know these runners. All are American citizens who travel the country and the world representing the USA. One of them told me how grateful he was for the opportunities America had given him.

Such a happy encounter resulting from a chat over lunch and a common love of running. 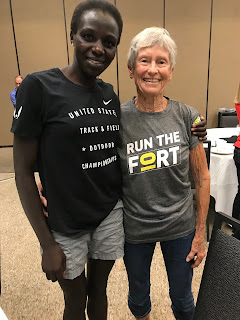 Posted by Libby James at 3:52 PM No comments: