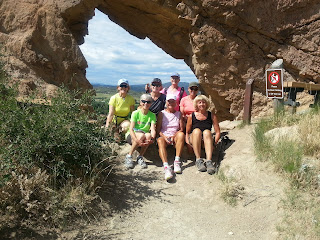 Old friends gathered at Devils Backbone in Loveland
Posted by Libby James at 7:03 PM No comments:

Getting together with old friends

In the last decade, we’ve gone our separate ways. We’ve retired, moved to sunnier climes, taken up heavy-duty hiking, biking and yoga, embarked on world-wide travels and done our share of volunteering. Most of us have left behind the days when we ran several times a week and participated in races, from 5ks to marathons, near home and as far away as The Big Apple. We no longer have a chance to share our lives on the weekend runs we took together for so many years.

Last Friday morning, the parking lot at Devil’s Backbone hiking area west of Loveland was filled with cars and knots of people getting ready to set out on the trails.  As soon as I pulled in, I saw them standing close together, clad in a rainbow of colorful t-shirts, already animated by each other’s conversation. Thanks to an especially thoughtful one of us, we’d been drawn together for a morning hike to be followed by lunch.

We hesitated for a few minutes, concerned by reports of a rattlesnake that had apparently taken up residence on the trail. But we soon forgot about him in our determination to get caught up. The rail was narrow enough that even walking two abreast was tough in places. And that was frustrating because we all wanted to interact with everyone in the group. We managed, switching off to chit chat with first one, then another, catching up on lives in a way that just isn’t possible via social media.

After a couple of hours, we found ourselves back at the parking lot, sweaty and ready to head toward our lunch spot, a popular Mexican restaurant west of Loveland. There we had a chance to relive some of our adventures; a trip to New York for a marathon, a biking adventure in Moab where rain turned the trail to mud and we had to carry our bikes to firmer ground, and a memorable hike and overnight stay at the bottom of the Grand Canyon. Sometimes reliving an occasion is almost as much fun as doing it the first time.

Surely these events brought us closer to each other. Any time you bike, hike or run with someone for an extended period of time, you find yourself with your mouth open, sharing stuff you would never address in cocktail party conversation. In other words, the nitty-gritty stuff of life.

I’m so thankful for this brief opportunity to get together again. I’m thinking we’ll be in touch more frequently than we have been lately, and that makes me feel good.

Posted by Libby James at 9:48 AM No comments:

10, 25, 56, 79, 22. What numbers should come next in the series? Just kidding. There’s no answer to that question. As what I call “the birthday clump” in my family ended this morning with a birthday phone call to a granddaughter. Between July 2 and 20, five female members of my family roll into a new year in their lives. I’m one of them.

My family has grown enough that it is sometimes a scramble to remember everyone’s birthday. So it’s convenient to have so many come all at once. No one in this group is likely to be forgotten.

It’s important. Every card, Facebook comment or phone call means a whole lot, I realized more than ever this year. I was grateful for every one. We all need acknowledgement on the day in which we came into the world, even if we don’t think we do.

I’m planning to do a better job with remembering the birthdays of family and friends. These days there are all kinds of ways to be gently reminded and to send good wishes. No excuses.

By the way, just in case I forget, here’s wishing you a Happy Birth-day whenever it may come during the next 365.

Posted by Libby James at 6:46 AM No comments:

Last Wednesday afternoon I was allotted a whole hour to talk about writing at the Red Feather Lakes Community Library, in the foothills of Northern Colorado, about an hour from my house. Jeanette, the library lady, gave me free rein to talk about whatever I pleased. I brought along a few books—a couple of mine and several published by Penstemon Publications, aka my writing group of many years.

The drive into the hills was spectacular. There has been way more rain than usual in these parts and the countryside is various shades of luscious green.  High up you can see the charred trunks of trees burned in the High Park Fire of 2012 standing as dark sentinels on land now subject to flooding for lack of undergrowth.

Preparing this casual little talk gave me an opportunity to ponder my checkered writing life from a high school kid first enamored of the written word because of an English teacher in Philadelphia, then stymied by a journalism teacher in college and finally concluding that putting words on a page is something I gotta do regardless of the consequences. It’s been no way to earn a living, but it has and continues to bring me great pleasure.

I scrounged through my book shelves and found my masters thesis on western writer Dorothy Johnson. When I’d finished writing it, my husband called her up in Missoula, Montana and said, “My wife knows so much about you, I think you should meet her.” We flew to Missoula and I spent a whole day with a little lady, then in her 80s, who looked like she’d be right at home at a church bazaar and who had written A Man Called Horse and The Hanging Tree.

I remembered writing about my close group of college friends and bringing the Rev. Bob Geller’s story to life. More recently I’ve been doing middle school stories, Running Mates and Frisbee Dreams and a picture book, Muffin Magic. One of these days I’m going to revise White Shadow, the story of Janet Mondlane, “godmother of the (Mozambican) revolution.” I still think it is a story that needs to be told.

Meanwhile I’m having fun writing about the people in and around Wellington, Colorado who help make the world go round. I also spend some time writing about running for the Fort Collins Coloradoan and for Double Runner Magazine.

And I seem to be hooked on writing this blog every week. So it is with those of us who like to write—or maybe we just have to have some “homework” in our lives.

Posted by Libby James at 9:00 PM No comments:

Saturday morning. July 4, 2015. A few minutes before the 7:30 a.m. start of the Firekracker Five running race in City Park, Fort Collins, Colorado, about two blocks from where I live.

A long row of porta potties lines one of the streets inside the park and I’m walking by. One of the doors opens, slams quickly shut and I hear a voice calling my name. I stop for a moment. Do I know this person? Sudden recognition—and surprise. It’s Dana. We met in Albany NY, a little over a month ago, at the Freihofer’s 5k race for women. We chatted some. I learned that she and her partner, Penny, were headed west in their RV in July. I mentioned where I lived and the fact that there was a fun 5k in my town on July 4.

What are the chances that, among 1,600 participants, we’d bump into each other this way? We ended up spending a good bit of the holiday weekend together—at the parade in rural Wellington where tractors outnumber floats and the car show nearby and at a couple of pre-fireworks friend and family gatherings in the afternoon and evening.

Dana and Penny got an insider’s look at the area from Altitude Running store where they redeemed an award card (Dana won the 40-44 age group) to the foothills trail near Horsetooth Rock where they went for a run the next day.

Sunday, under the shade of some big trees in City Park, Penny generously shared her expertise in the Pose Method, a running technique designed to guard against injuries while allowing for faster running with less effort. Well, it takes some practice to get good at it, but several of us were delighted to learn about it.

After a casual lunch at my house, Penny and Dana were on their way. We’ll follow their travels and stay in touch because we’ve become friends. And if we’re smart, we’ll work on that Pose Method a little bit every day.

These are the chance encounters that make life worthwhile.