All of a sudden, yesterday it was time for the first mow of the season. I hauled my push mower out of the garage, crossing my fingers that the old thing was still functional, and wheeled it to my front yard. 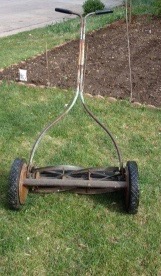 The last time I took it to be sharpened, a couple of seasons ago, the sharpener man warned me that my mower’s life was at risk. “This is the last time I can sharpen these blades,” he explained. “They’re so worn down, they just won’t take another sharpening.”

I inherited this lawn mower from a friend who discovered it in the garage of a house she bought. She was about to toss it out when I volunteered to save its life. That was years ago.

I’ve been using it ever since to cut my very small lawn. The whole process takes me less than 20 minutes.

I was mowing away yesterday when a girl probably seven or eight, came down the sidewalk on her scooter. She paused, looked at me mowing and said, “What’ s that?”

“It’s a push mower,” I explained. “Everybody used them a long time ago when there was no such thing as a power mower. Would you like to try it?”

She was hesitant for a moment, then laid her scooter on the grass and got behind the mower. She was short enough that making it move was a bit of a challenge, but she managed a few feet.

I’m hoping that my mower makes it through yet another season.
Posted by Libby James at 9:13 AM