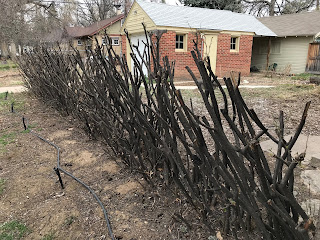 One day last summer the big bushy hedge that provided privacy along the west side of my backyard had reached a height and width that I could no longer deal with. Even with a ladder and a hedge trimmer with a long blade, I could not reach far enough across the top of the monster to keep its growth under control. I’d had enough. That was the day I began cutting down my hedge.

It took me four days. When I was through I had lowered the height of the hedge by at least two feet and I’d snipped off every single branch, leaving only the major trunks. Not a single green leaf remained.  A twisted column of dark, bare stems was all that was left. It looked pretty awful.

The neighbors wondered out loud if the hedge would grow back. I didn’t know for sure, but something told me that it would. Before winter set in, a new little sprig or two and had showed up and that gave me hope.

Now it is April and just this week, those little sprigs began to show up again. I’m betting that by midsummer, my hedge will be back. It’s going to be interesting to see just how it returns and whether or not it will fill in and prosper and serve to screen my backyard from the activity in the street beyond it.

The moral of this story?  If your hedge is bugging you, attack it. Then, have faith, sit back and see what happens.
Posted by Libby James at 12:51 PM