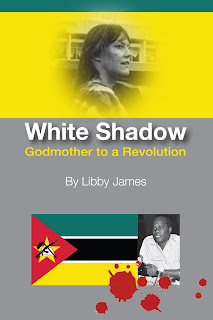 It’s been a long time coming, but today my work of historical fiction, White Shadow, Godmother to a Revolution became available on Amazon and will soon be available locally.  It is a story that has been haunting me since I learned about the life of Janet Mondlane during a stay in Mozambique in East Africa more than a decade ago. I first wrote it as non-fiction, then fleshed out some details and converted it to historical fiction.

When I first learned that my daughter and her family were moving to Mozambique, I had to search out a map of Africa to see where it was. It is a beautiful country with 1,500 miles of coastline on the Indian Ocean that lived under Portuguese domination for 500 years. After a decade of armed struggle, the country became independent in 1975.

White Shadow is the story of a life-long love affair that began between a young white woman with a year of high school to complete and a 31-year-old black man with a revolutionary mission.

Fiction does not come easily for me. I learned a whole lot in the course of writing this book and received invaluable help from members of my writers’ group and friends willing to give me feedback.

If you should decide to read it, and if you feel it to be worthwhile, perhaps you would be willing to tell one friend about it.

Here's a few words to give you a flavor of the book:

She was overcome with the sense that she'd known him in another time, that somehow she was drawing this dark man toward her. Janet fell in love when she heard Eduardo Mondlane speak at a church camp in 1951. The relationship was to define the rest of her life. The agony of racial discrimination, alienation from family, the pain of separation, the fear of betrayal and even death--none of these could derai a love that just is--like the love of a child, a lover, a grandmother--the beginning and the end. With Eduardo she went halfway round the world to fight for the independence of Mozambique. White Shadow is the story of her unsung role in a brutal ten-year war effort with all its victories and defeats, moment of despair and joy.
Posted by Libby James at 4:27 PM