I could have marked off a 108-mile path starting from home. I could have walked to Estes Park and home again. It would have been: very convenient, easy to plan and pay for, and would have involved absolutely no hassle on busses trains and planes to arrive at the starting point. And the exercise/fresh air component would have been similar.

But no. It would never have measured up to our 108-mile jaunt through Yorkshire on the Coast-to-Coast path in northern England, and here’s my attempt to explain why.

The scenery—green, green, green; the farm fields dotted with grazing cows and baaing, shaggy sheep giving you the eye as you make your way through a never-ending series of gates, stiles and fences. The stone walls that have been standing for eons with no mortar to hold them together, just the ingenuity of those who had to do something with the endless rocks that had to be removed before these fields could be farmed. The walls delineate oddly-shaped fields and seem to have no rhyme or reason as they line the hillsides. Then there are the crumbling edifices of the past such as the enormous remains of Eastby Abbey in Richmond, a bustling market town of 8,400. It was there that we rendezvoused with special relatives and enjoyed a dizzying array of dishes at an Indian restaurant.

About the food. One of our group gained almost five pounds, only partially the result of “full English breakfasts” that started with your choice of fruit, yogurt, granola or cold cereal and progressed to eggs, bacon, sausage, baked beans, tomatoes, toast and blood pudding (which we all passed on). You could choose to try a kipper for breakfast, for some variety. Pub dinner favorites were fish and chips and steak and ale or chicken pie. And then there was the beer, which became a necessity at the end of each day. The English do an amazing job of food presentation—it always looks so very good—so beautifully arranged on the plate. 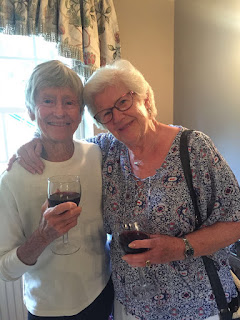 This second part of the path, (We did the first 85 miles two years ago.) is a bit less rocky, steep and wild than the first half from St. Bees to Kirkby Stephen, but it has its own challenges. There’s a 23-mile day, mostly flat, and a 13-mile day where you climb up and down on narrow, rocky paths at least four times, always thinking that this hill will surely be the last one. Knees and toes object to the steep downs. The Brits tend to stepping stones rather than switchbacks. They are just so tough. The peat bogs were a challenge, making for wet, muddy e, but not as bad as they might have been in wet weather. We experienced only a single hour of rain on the entire trip. Hours after we finished the skies clouded up and the rain began.

And the people: A highlight for me was walking for a whole day with Mark and his wife, Debbie. Mark is a Yorkshire lad who lived with our family in 1976 and attended high school with the James kids. We’ve been friends ever since, and we always will be. It goes back to a chance meeting in the rain in a campsite in Germany when Mark was 11. His mother, Pat, joined the group for dinner and the evening and gave a little talk about this long-time friendship that brought a tear to my eye.

These are a few of the things I would not have experienced walking close to home. I don’t mind putting up with crowded airports, delayed planes, luggage hauling,  security lines and sleepless hours in the air. While it is always good to be home, I’d go again, even tomorrow. I hope that I never forget the exhilaration of getting away, being in a new place, meeting interesting people, and realizing that there’s more than one way to do things.