A World of Ideas 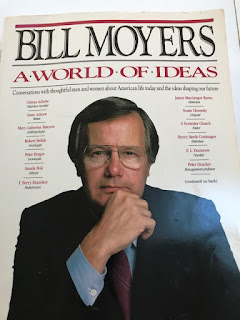 The other day I needed something to read. I glanced through my bookshelf and randomly picked up Bill Moyers’ book, A World of Ideas: Conversations with Thoughtful Men and Women About American Life and the Ideas Shaping Our Future. Publication date: 1989. It’s a big fat book, so heavy that I think I was avoiding it all these years as unsuitable for reading in bed.

Turns out that this book is exactly what I need right now. It is giving me a whole new perspective on what is happening in our country today and what the future may hold. Moyers’ book grew out of a series of conversations he taped across the country for a PBS television special, “ Six Great Ideas.”

He explains that he had been discouraged by a feeling that the people in the United States were locked away in their separate realities, their fixed ways of seeing themselves and strangers. He believed that depending on television to connect to the outside world was only fortifying peoples’ walls and withering their intellects.

Through conversations he engaged in with scientists, poets, historians, writers and teachers, he found “a kingdom of thought, rich insights into our times.” He was reminded that it is ideas that serve to open our cells.

I was struck by the parallels with what is going on in our nation, and also the world, today.

Moyers noted that running through all the conversations he had was the notion that change was happening so rapidly and globally that our institutions were not able to keep up. He concluded that there is no grand solution to this predicament. Instead he suggests that we can best negotiate the future through, in his words, “a multitude of shared acts in science, education, government, politics and local civic life.”

He interviewed the following people:

It’s quite a list. I’m finding this book eye-opening and sometimes heartening. It will soon be 30 years old but it contains endless wisdom applicable to the present.
Posted by Libby James at 6:53 PM