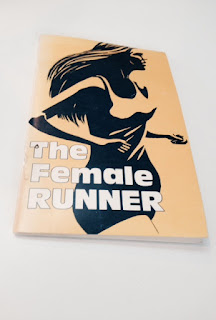 It was many years ago when a friend of mine told me that she had quit running because her calves were getting bigger. Her decision didn’t make me quit, but it did make me think. My calves have always been pretty big and if I kept on running, well, they would only get bigger—and then what?

Last night I came across a skinny little book hidden away on my shelf called The Female Runner, published in 1974 by World Publications. My 23-year-old runner granddaughter, Abby, was visiting and we chuckled together over the foreword which begins, “The runner’s world is, always has been and will for a long time to come continue to be a man’s world. Women only get to sample the leftovers from it.”

It goes on to say that females make up only one percent of the running population, run in shoes designed for men, race in meets that no one notices and get what’s left of expense money, prizes and publicity after the men have taken theirs.

How times have changed! These days women often outnumber men in races of all distances and garner prize money and recognition equally with men.

The book has less than 50 pages but contains a whole lot of fascinating information in 10 short chapters written by males and females involved with running themselves and with training women runners in those days. They discuss the physical and psychological restraints that affect the performance of women runners and they advocate for change.

Did you know that the ancient Greeks beheaded any female who dared to watch a warrior athlete perform? One superintendent of schools refused to let girls run cross country because “they would just go out into the woods and get laid by the boys.” Dr. Kenneth Foreman was told by a colleague that he was a fool to work with female athletes because they were incapable of tolerating stress and would only get into trouble with male athletes if he let them train together.

Dr. Joan Ullyot, 3:13 marathoner and author of Womens Running, began running when she was 30 and has long experience training women runners. She commented on the irony that women were limited to running sprint events for years when their physique made them unsuitable for short explosive action and much more suited to distance events. “Women are made to run long rather than fast,” she insisted.

I didn’t enter a race until I was 40 in 1976. For the five years or so before that, I ran a mile or so every morning, most of that time with no thought of ever going faster or longer. But at that 10k race in City Park a couple of blocks from home, I had a taste of success. Two years later I ran my first marathon. I decided to do it because it just seemed so impossible—to run 26.2 miles. It was a kick, and afterwards I figured I could do most anything!