“I left my broken down running shoes in Mozambique. Along with a big chunk of my heart.” That’s how I started a few words I wrote after I came home from nine months away-- where I learned about Janet Mondlane. Here’s the rest of it, to give you a taste of the place.

I’ve been home six months now, long enough to know I’m not the same person any more. Sights, sounds, tastes and smells from halfway round he world live in my head. I think about the people I shared my life with there. Those, like me, have left, and those who will never leave.

What about this Sub-Saharan nation whose eastern coast meets the startlingly blue Indian Ocean for 1500 miles? Whose inland edges butt up against Tanzania, Malawi, Zambia, Zimbabwe and South Africa? I saw only a small part of Mozambique, met only a few of its 20 million people. But I saw enough country and met enough people to come under its unlikely spell. Enough that I obsessed with learning its history, in order to understand its wrenching poverty, the reasons for its suffering and the strength and persistence of its people.

I went to Africa because I had been drawn to the place since childhood by Rudyard Kipling’s Just So Stories and the great grey, green, greasy Limpopo River. And I had a place to stay, thanks to the hospitality of a daughter and son-in-law. So I rented my house in Colorado and said good-bye to my job for a year.

I’m embarrassed now, to admit that I had to check a map to learn where Mozambique lay among Africa’s fifty-three countries. It’s an American thing, this deficiency in geography. Maybe it’s because we live in a big, beautiful, powerful place and it’s easy for us to conclude that nowhere else is really all that worth knowing. And unlike the people in most of the rest of the world, we have been hard-pressed to see the need for learning a language other than our own, or much point in learning in depth about places beyond our shining shores. But our world shrinks daily and we can no longer afford to hold these attitudes.

I came home from my sojourn eternally grateful for enough time in another place, so different from my home, to provide the window through which I view the world to grow brighter, more flexible, with more capacity to expand. I still have a long way to go, but the process has begun. 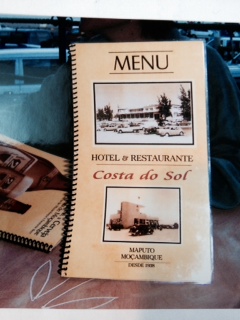 It’s an endless sit in a small seat to get from Denver, Colorado to Maputo, Mozambique. My overnight flight from Denver to Frankfurt, Germany took nine hours. After a 12-hour pause there, I boarded a ten-hour-5,400-mile flight to Johannesburg, South Africa. There I spent six hours between flights checking out the shops and the people, getting my first taste of Africa. I didn’t know that my dollars would be welcome in the shops and restaurants so by the time I was served a dried out ham and cheese sandwich by South African Airlines on the one-hour flight to Maputo, it tasted gourmet. I was starving!

A few hours later, seated with my family at an outdoor restaurant overlooking the Indian Ocean, I had one of those, “Where am I and how did I get here?” moments. My jet-lagged mind worked overtime trying to fathom the jumble of shouting people, honking vehicles, street vendors, tarp-roofed stick shacks and pungent smells that lined the pitted, potholed road to town from the Maputo airport. There I was, ordering a seafood salad, surrounded by three grandchildren and their parents who had made this commitment to take me in for nine months, full of wonder at my good fortune.
Posted by Libby James at 3:11 PM