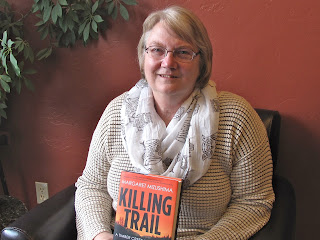 Everybody has a story to tell and many of us dream of sharing it on the page, whether in the form of a memoir, novel or piece of how-to, self-help or informative non-fiction.

Having a story to tell is one thing.  Accumulating the knowledge and technique to write it well and then applying the seat of the pants to the chair and the fingers to the computer to get the job done is a whole other ball game.

Yet the hardest of all is quite likely the process of sharing it with the world—of actually getting it published under circumstances that are likely to get it into the hands of readers.

This week, in the course of conducting an interview for the North Forty News, I had the privilege of getting to know someone who is right now basking in the glow of having published Killing Time, her debut mystery novel. The second book in the series will be out this fall and she has contracted to write two more.

Bravo! I say. Margaret Mizushima is a speech therapist by training and for two decades worked in her field, in a hospital setting and in her own rehabilitation business.

Then she went back to her ranching roots, working part-time with her veterinarian husband, caring for a herd of Angus cattle and learning how to write in rural Wellington, Colorado. She attended classes, went to writers’ conferences and joined writers’ groups in order to find out what it takes to write a publishable book. She delved into non-fiction at first but then decided she wanted to write a mystery.

It took numerous re-writes before Crooked Lane, a New York publisher showed an interest. They loved the characters she’d created but wanted changes to the plot. That took rewriting two-thirds of the book in a frenzied three-month period.

Last December the book came out. It has won awards. She’s been invited to speak at mystery writers’ events and to contribute to a mystery writers’ blog. She has
finished her second book. “It was easier than writing the first one,” she says. She’s on her way!

Maybe you have to be a writer to fully appreciate the enormity of her success. I’m just thankful for the part-time job I have that allows me to meet and ask questions of people like Margaret Mizushima. I can hardly wait until Stalking Ground comes out next September.
Posted by Libby James at 4:15 PM