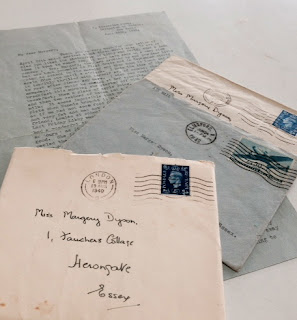 For more than three-quarters of my life, all but eight years of it spent in the US, my mom hasn’t been around. But not so long ago she showed up, big as life, in five old letters that arrived from England, sent by the daughter of her good friend and beloved maid, Margery.  She discovered them when cleaning out her mother’s belongings.

It was a second trip across the Atlantic Ocean for the thin blue aerograms. Their first was by sea, between 1941 and 1943, a more precarious trip because of World War II, the war that forced my family to leave the UK for the US, my dad’s country.

The letters are a walk back in history; funny, revealing, surprising, tender and a glimpse into another time and way of life. I call them the Bess Letters.

“You will be staggered to hear that since we arrived here, I have been managing without a maid. (Her children were one and four at the time.) I have a very nice girl who comes in on Saturday morning and two afternoons a week. She cleans all through and Mummy does the rest. Of course, we have no fires to do and hot water all the time, which makes life much easier, but still I have plenty to do with a hot lunch every day and then dinner at night.

“We are still determined to come home as soon as the war is over. It looks like America will be in it soon. What a terrible, terrible business it is….”

“I still smoke like a chimney and the grocers over here all have fags (cigarettes) so I hardly ever run out. They are much cheaper than at home and one soon gets used to them.”

“The news looks very grim at the moment. The Japs seem to have got a good start and are certainly making the best of it. I do pray that Singapore will be able to stand.”

She goes on to tell Margery that her brother, stationed in India with the British army, wrote that he hoped they’d be together again in ten years.

“Margery, I am so glad that you have another boyfriend and I hope he is good enough for you, let him do the spoiling this time.”

“I have had my hair cut off and a super permanent wave. I look pretty hot stuff, and I must say, it’s a relief to get rid of those hairpins.

She jumps from the mundane to more important things. My dad has been assigned a wartime job in Washington DC: “…we finally found a shack to live in down here…there are hundreds of people still looking for somewhere to live… We are only seven miles from Washington but it takes more than an hour to get into town.”

Margery had been taking care of our family canary, Huntsie. Betty says: “Please don’t worry about Huntsie. I am staggered that you managed to keep him alive for so long and I must owe you quite a lot of birdseed.  Have not told Libby but when she mentions him, I will tell her.”

And so her life goes on. A few years ago, I visited Margery in England and we’ve been in touch ever since.  In some ways, aerograms, a thing of the past, have an advantage over ephemeral emails.