A mile west and a few yards north of my house, my favorite bike route begins. It's a 12-mile ribbon of road that becomes increasingly rural as it heads north. After about four miles, the traffic becomes  sparse and riding becomes relaxing.

It's been too long since I've been here, though for more than 20 years, I rode this way quite regularly. I know the landmarks, from the railroad tracks that cross the road to the power plant, the farm houses, the side roads that say "no outlet," and a few places where I need to shift into a lower gear to summit a hill.

My favorite landmark lies about 11 miles into the route behind a fence, on top of a little hill. It must have been home to a farm family long ago, but for at least the last 20 years, I have been watching it slowly sink toward the ground. I have a series of photos documenting its decline and the changing shape of its roofline as it slips toward oblivion.

The place has always fascinated me.  This morning, as I drew close to it, I began to wonder if it still existed. I was fully prepared to see an empty spot on the hillside where it once stood. But no. It has taken on a new look. It seemed larger to me, even though it's lower to the ground, and somehow more spread out.

Because it is behind a fence, and because it is falling apart, I have always observed it from a distance. But this morning, I discovered a path that allowed me to go closer and to get a more satisfying photo of it. 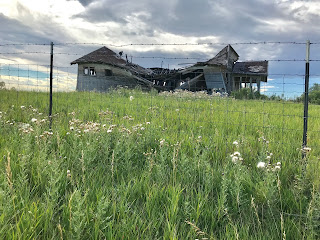 Ha, I know where you live so I am trying to guess what route you were describing. Poudre Trail, Bingham Hill?

Hey, you know how I told you a few years ago that my next biking adventure was going to be riding to Walden and back on the Huffy? I finally did it this summer! https://felixwong.com/2019/07/fort-collins-walden-200-riding-a-double-century-on-a-huffy-cruiser/

Been enjoying your pieces in North Forty News. Then comes this, enough to move me from a passive spectator of your work to an active fan.

Touching, inspiring, nudging me to ponder.