Lookin' on the bright side

The other day I was looking through Bill Moyers “A World of Ideas,” published in 1989. It is billed as conversations with thoughtful men and women about American life today and the ideas shaping our future. 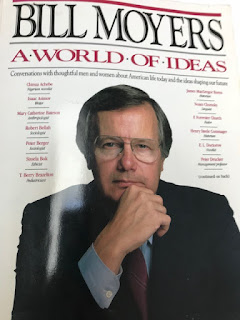 In the course of talking with historian Barbara Tuchman in the Watergate era, Moyers said to her, “You said that the American presidency has become a greater risk than it is worth. You said, “It’s no longer my country right or wrong, but it’s my president, right or wrong, so that the loyalty has been transferred from the country to the man, from the institution to the incumbent.”

And Tuchman responds, “No man can support that now. The only person whoever did was George Washington, who’s my example of a true hero… She went on to say that an earlier revolutionary hero, William the Silent of the Netherlands, is supposed to have said, “It is not necessary to hope in order to persevere.” She thinks that is a wonderful sentiment and notes that the Dutch revolt against the most powerful empire of Europe took 80 years.

Washington had faith in Providence, Tuchman says. He believed that no matter what we’ve suffered and what is going wrong, Providence will bring it right, as it so often has before.

It is comforting that while we tend to despair over these times, they aren’t new, times have been worse, and if we are to believe George Washington, Providence will prevail.

Meanwhile, it is glorious summertime. Make the best of it.