It's not about the finish line 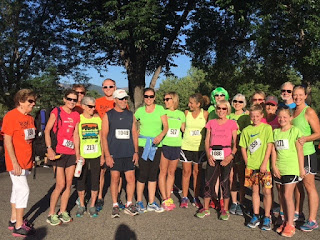 I think maybe I’ve come of age as a runner. Yesterday I did The Run for Hope, a 5k race around City Park, very close to my home. I love this race and have done it many times, but this year was special because a big group of us signed on as “Team Morgan” in support of our fellow runner Cathy Morgan who is waging an incredible battle against the big C. We rounded up as many lime green shirts as we could find and went for it. Part of our group surrounded Cathy and walked the course with her. They all finished in fine style.

My goal was to see if I could better my 5k time for this season, specifically finish the race in under 25 minutes. Probably not impossible, but probably quite unlikely. It would be great, I figured, if I could head for the 5k masters championships in October knowing that a 24-something was still possible.  No harm in dreaming, right?

Even so, I was pretty casual about this race. Too casual it turns out because I never heard a starting gun. In fact, I wasn’t absolutely sure just where the starting line was. When a whole bunch of people started moving, at first I thought they were on their way to the start line. Then I realized that they were actually running,  a fact that made me conclude that this race must have started.  Then I got serious and, I must admit, I tried to make up for lost time.

But unknown to me, I had failed to step on the timing pad at the start line. Who knows how that could happen? I was chatting at the time. Maybe I walked around instead of across it. I’ll never know.

When it was time to check the finishing board, my name did not appear. I’ll never know what my time was, though I can estimate because I saw the clock at the finish line. I didn’t break 25 minutes but I’ll never know how close I came.

And what did it matter? It didn’t.

I had a great time. It was fun being with Morgan and all her friends. The weather was great.  The band and the singer were terrific. The race was well organized. There was a good turnout. The cause was a great one.