A visit from Liz 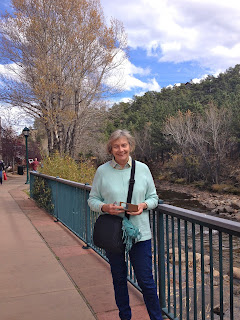 The next best thing to flying off to the southwest tip of Australia to visit a cousin is to have that cousin come and visit you.

That’s what happened to me this week. Liz Marshall and I had never met.  I was hazy enough about just who she was to turn to a family tree to place her.  I discovered that our grandparents were siblings, making us second cousins. Those grandparents were numbers three and six among the ten children in the Eve family.

Both Liz and I grew up in England. We probably played together as kids. I left for the U.S. at age 10 and she ventured to Australia after completing nurses’ training in England. She married and had three children and has lived in Albany, a town of 30,000 five hours south of Perth, ever since. She took time out from a visit to her son and his wife, who live in New York, to check out this Colorado cousin.

I’m so glad she did. It was as if we’d known each forever. We pored over my parents’ photo album and found a picture of Liz’s mother who, I learned, was a bridesmaid for my mother.

We managed to pack quite a bit into three days from a luncheon and book review where she met more than a dozen friends of mine to a high school soccer game. We made a quick trip up the hill to Estes Park and experienced a slightly harrowing ride home through massive road construction. We took a couple of early morning walks around the local park and downtown. We drove to Horsetooth Reservoir for a view of Fort Collins.

The places we went didn’t matter so much. What did matter was our talk. We barely scratched the surface of all we had to catch up on. We discovered that not only are we both Elizabeths, both our mothers were named Elizabeth as well. They were the best of friends. Liz remembers looking forward to “care” packages from my mother in the U.S. during the lean years following World War II in England. A package of Betty Crocker Devils Food Cake Mix stands out in her memory as a real treat.

Wednesday night we ate burritos with a few friends and family, and Thursday morning early, Liz was on her way. I feel blessed to have connected with a cousin that I only vaguely knew I had. Maybe one day I’ll show up on her doorstep because we still have a long way to go to catch up for the last half century or so.