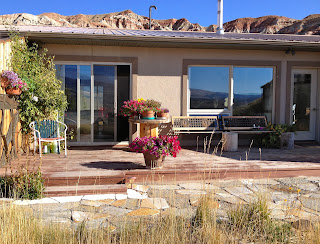 The way things worked out, I only got to spend an hour with my friend Ellen, in her home/studio in Dubois, Wyoming. But surprisingly, it was enough. She moved into the passive solar space she lovingly designed and built three years ago outside town in the shadow of Table Mountain in the Wind River Range and I have wanted to see it ever since.

Ellen’s a wildlife artist who knew exactly how and where she wanted to live in order to paint with inspiration, abandon and solitude. She made it happen nestled into the striated foothills of the Wind River Mountains.

Her first concern was her workspace which she designed to have northern light, enough glass to make her feel as if she’s outdoors and a work area that’s never in shadow. Several of her amazing horse paintings, in various stages of completion are the central feature of the studio.

To satisfy her need to garden--and to eat healthy greenery year round—she built a 12’ by 12’ green house off the kitchen. She dug out and insulated an area below it so that the ground never freezes and she can grow hardy vegetables through the winter. “I only go to the grocery store to buy bananas,’ she joked, then added that yogurt was also on her list.

But she never buys meat because every fall she puts away her paintbrushes for a while and gets out her hunting gear. She bags enough wild game to feed herself for the year and to give to her four children as Christmas gifts.

No space or need for a dishwasher in Ellen’s kitchen, but a hefty meat grinder sits on a counter top, and there’s an inspiring landscape to view from windows above the kitchen sink.

A chunky wood burning stove heats the kitchen and dining/living area on cloudy days but Ellen says the house retains heat so well that she only burned a half cord of wood last winter.

Her house is small, but her bathroom is spacious and features a small sauna which she says works wonders to relieve arthritic pain. There’s a washing machine tucked into one corner, but no dryer.  “It’s so dry here, clothes dry outside in an hour,” she said.

The single bedroom in the house has the feel of being open to the night sky, but Ellen sleeps outdoors in the summer until the nights get cool enough that “it’s not fun any more,” in her words.

We had such a short visit because Ellen was on her way to join friends to make music with her guitar and I was passing through, on my way home from a few days in Jackson Hole.
I couldn’t help noticing the contrast between the serenity of Ellen’s place and the fun but frenetic pace of Jackson where there seems to be a conference or convention always in progress, bringing lots of people and unexpected traffic jams to that special little corner of Wyoming.
Posted by Libby James at 8:38 AM